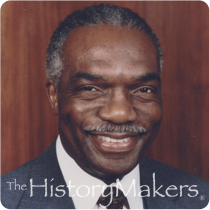 See how Walter J. Leonard is related to other HistoryMakers
Donate Now

A leading educator and scholar, Walter Leonard was born on October 3, 1929, in Alma, Georgia. His early education was in the Savannah, Georgia, public school system and later at Savannah State College. He went on to study at Morehouse College, Atlanta University’s Graduate School of Business, Howard University School of Law and Harvard University Business School.

Leonard has served as Assistant Dean of both the Howard University School of Law (1968-69) and Harvard University Law School (1969-71). As Assistant Dean and Assistant Director of Admissions at Harvard Law School, he is credited, through the use of conferences, recruitment, and outreach programs, with the education of more minority and women lawyers than almost any other administrator in the United States. In 1971, Leonard was appointed to the position of Special Assistant to Harvard University's President, Derek Curtis Bok. There, Leonard was the primary force behind the Harvard Plan, a blueprint for establishing equal educational and employment opportunities in higher education. The Plan was cited approvingly by the United States Supreme Court in the Regents of the University of California v. Bakke decision and adopted by hundreds of colleges and universities nationwide. Leonard also chaired the committee that established Harvard University’s W.E.B. DuBois Institute for Afro-American Research.

Perhaps, his most awe-inspiring moment was in 1978, when, as president of Fisk University, Leonard used a $1.5 million insurance policy on his life as collateral to obtain a loan to keep the school from closing. Fisk was nearly bankrupt when Leonard assumed the presidency in 1977. Over the course of his seven year presidency, Leonard managed to raise more than $12 million dollars for Fisk University.

Over the years, Leonard has found time to serve as a board member or consultant for many of the country’s most-renowned policymaking organizations, including the Ford Foundation, the U.S. Department of State, the U.S. Department of Commerce and the United Negro College Fund, and many others. He has published numerous scholarly articles on such topics as the First Amendment, black capitalism, the student protest movements in the universities and affirmative action. Two fellowships were created at Oxford University in his honor.

See how Walter J. Leonard is related to other HistoryMakers
Donate Now
Click Here To Explore The Archive Today!