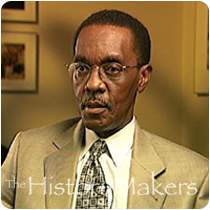 See how Walter Hill, Jr. is related to other HistoryMakers

Walter Hill, Jr., was born in St. Louis, Missouri, on May 22, 1949. After finishing high school, Hill enrolled in the College of Wooster, earning a B.A. degree in history in 1971. From there, he attended Northern Illinois University, studying American history. Earning an M.A. degree in 1973, he returned to school to earn a Ph.D. from the University of Maryland in 1988.

After completing his master’s degree, Hill taught at St. Louis University from 1974 to 1977. He returned to school in the fall of 1977 to work towards the Ph.D. in U.S. History at the University of Maryland, College Park, Maryland. He worked as a graduate teaching assistant and later as an instructor in the Afro-American Studies Program between 1982 and 1983. While working towards the Ph.D., he also worked at the National Archives and Records Administration as a graduate intermittent research student until 1983 in the Office of the Archivist and Office of Federal Records. From 1983 to 1984, he held a pre-doctoral fellowship at the Museum of American History, Smithsonian Institution.

As a noted historian, Hill appeared in several documentaries, as well as on Good Morning America, Washington Journal and Fox TV. He served on the editorial board of the African American History Bulletin, the Executive Council of the Association for the Study of Afro-American History and on the advisory board of The HistoryMakers, among others. He has also written extensively, his work appearing in such journals as the Newsletter of the American Historical Association and the Journal of Minority Issues.

See how Walter Hill, Jr. is related to other HistoryMakers
Click Here To Explore The Archive Today!