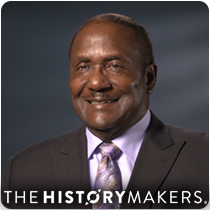 Favorite Color:
Blue
Favorite Food:
No
Favorite Time of Year:
Summer
Favorite Vacation Spot:
No
Favorite Quote:
There is no such thing as a pet rattlesnake.

Favorite Color:
Blue
Favorite Food:
No
Favorite Time of Year:
Summer
Favorite Vacation Spot:
No
Favorite Quote:
There is no such thing as a pet rattlesnake.

See how Walter Furnace is related to other HistoryMakers

State representative Walter Furnace was born on December 31, 1943 in Ennis, Texas to L.D. Birdow and Janet Medlock. He graduated from George Washington Carver High School in 1962, and enlisted in the United States Air Force and spent his final two years of service in Anchorage, Alaska. In 1966, he attended Gambell Street Business College and received his B.B.A. degree in business administration from the University of Alaska, Anchorage in 1972. He later graduated from the SouthWest CUNA Management School in 2009.

After his U.S. military service, Furnace was hired as a management trainee at the National Bank of Alaska. In 1971, he was named assistant vice president and branch manager of the bank, a position he held for over nine years. After his graduation from the University of Alaska, Furnace was hired as president of the Parent Teacher Association in Anchorage. As president of the PTA, he was elected to a position on the Anchorage School Board. Nine months later, he was elected as president of the School Board. During his time on the School Board, Furnace spent a great deal of time “lobbying” for educational initiatives in the state capital, Juneau. In 1982, Furnace was elected to the Alaska State House of Representatives. He served a total of four terms as a state representative and focused on funding education programs within the state. Furnace returned to the financial services industry in 1994 as the assistant vice president and branch manager for Nations Bank Mortgage. In 1998, he left Nations Bank and joined American Airlines Federal Credit Union in Dallas, Texas as the government and industry relations manager. While in that position, Furnace coordinated the company’s legislative efforts by working with state, local and federal governments, as well as the media, and helped create policy proposals.

Furnace was recognized at the national level for his commitment to education and for his successful career. In 2014, the National Association of Federal Credit Unions awarded him the Paul Revere Award for Outstanding Grassroots Advocacy. Furnace’s life was profiled by Randall Kenan in the book, Walking on Water: Black America Lives at the Turn of the Twenty-First Century, which was published in 1999.

Walter Furnace was interviewed by The HistoryMakers on September 15, 2017.

See how Walter Furnace is related to other HistoryMakers