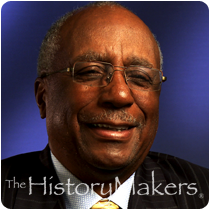 See how Walter Douglas is related to other HistoryMakers

Businessman and Detroit civic pioneer Walter Edmond Douglas, Sr. was born in North Carolina, and raised in the town of Hamlet, a major railroad community. His parents were educators. Douglas holds two degree from North Carolina Central University. He earned his B.A. degree in accounting in 1954. A year later, Douglas earned his M.B.A. from North Carolina Central University. Upon graduation, he briefly taught at Edward Waters Junior College in Jacksonville Florida, before being drafted into the U.S. Army. In 1965, Douglas was hired by the Internal Revenue Service. An assignment transfer brought him to Detroit in 1966.

Douglas was deeply moved by the July 1967 riots in Detroit, which was the worst in American history at the time. He began volunteering around the city, and his efforts were noticed by city leaders. In 1972, he became the vice-president of New Detroit Inc, a nonprofit founded in 1967 to deal with the city’s racial and employment tensions. Douglas became a key advisor of Coleman Young, the city’s first African American mayor, following Young’s election in 1974. Young appointed Douglas to several positions, notably, the city’s new civilian police commission. In 1978, Douglas was named president of New Detroit. He remained in that position, until he decided to test the private sector.

The year was 1985 when entered into a car dealer ownership a minority training program hosted by the Ford Motor company. The purpose of the program was to give more African American a chance to own dealerships. In 1986, Douglas purchased a share in Avis Ford in suburban Detroit, a historic dealership owned by the founder of the Avis Rent-a-Car System. Douglas became majority owner in 1992. Since then, he has earned a host of awards for the success of his dealership, and his continued work within the Detroit community as a philanthropist. In 2006, he turned over the business operation to his son, Mark. He lives in suburban Detroit with his wife of more than forty years, Retha.

See how Walter Douglas is related to other HistoryMakers
Click Here To Explore The Archive Today!