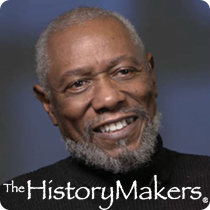 Favorite Color:
Black
Favorite Food:
German chocolate cake
Favorite Time of Year:
Fall
Favorite Vacation Spot:
My studio
Favorite Quote:
It Is What It Is Until You Change It.

Favorite Color:
Black
Favorite Food:
German chocolate cake
Favorite Time of Year:
Fall
Favorite Vacation Spot:
My studio
Favorite Quote:
It Is What It Is Until You Change It.

See how Walter C Jackson is related to other HistoryMakers

Sculptor Walter C Jackson was born on January 21, 1940 on his grandparents’ farm near Durant, Mississippi. He moved with his parents and brother to Jackson, Mississippi at the age of six, where he attended Smith Robertson Elementary School and Lanier High School. Jackson earned his B.S. degree in art education from Jackson State University in 1963, and went on to earn his M.F.A. degree from the University of Tennessee in 1971.

From 1963 to 1968, Jackson headed the art department at Douglass High School in Memphis, Tennessee. He joined the faculty of the University of Tennessee in 1971, serving as an assistant professor of sculpture until 1980. Jackson then became an adjunct assistant professor at York College of The City University of New York for two years, beginning in 1984. After two years, Jackson left to join the Bronx Museum of Arts. In 1989, Jackson was named as an artist in residence at the Bronx River Art Center. He worked at the Convent of the Sacred Heart before returning to the Bronx River Art Center as its executive director from 1995 to 1998. He has presented exhibitions of his works at galleries and museums throughout the United States including: The Sculpture Center in New York City; P. S. 1 in New York City; Pittsfield Museum in Pittsfield, Massachusetts; Roswell Museum in Roswell, New Mexico, The African-American Museum in the Hempstead area of Long Island, New York and the Mississippi Museum of Art in Jackson, Mississippi. Jackson’s works are included in the collections of the New York Public Library’s Schomburg Center for Research in Black Culture, the Studio Museum in Harlem, the Tennessee Museum of Contemporary Art, and the Anderson Museum of Contemporary Art, Roswell in New Mexico. Jackson’s work reflects the melding of the folklore that was a major part of his experiences growing up in the rural south with the industrial and technological promise of the urban.

Jackson is the recipient of many grants and awards including: NEA Artist In Resident Grant, New York Foundation for the Arts, and a NY State Council for the Arts (CAPS) Grant. Jackson was selected for an artist-in-residence fellowship at the Studio Museum in Harlem in 1982, and the artist-in-residence fellowship at the Roswell Museum in 1994. He also completed the workshop residency at the Museum of Holography in 1987.

Walter C Jackson was interviewed by The HistoryMakers on December 16, 2016.

See how Walter C Jackson is related to other HistoryMakers
Click Here To Explore The Archive Today!