Information about Wadsworth A. Jarrell, Sr. 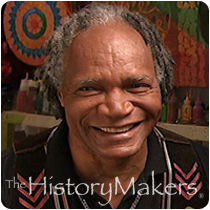 See how Wadsworth A. Jarrell, Sr. is related to other HistoryMakers
Donate Now

Revolutionary social artist Wadsworth A. Jarrell, Sr. was born in Albany, Georgia, in 1929, the youngest of six children. Jarrell credits his father, a furniture maker, and the rest of his family for supporting his childhood interest in art. After high school, Jarrell served in Korea, and then moved to Chicago. In 1954, Jarrell enrolled in the School of the Art Institute of Chicago majoring in advertising art and graphic design. Not long afterward, Jarrell lost interest in commercial art and took more drawing and painting classes.

Graduating from the Art Institute in 1958, Jarrell spent several years working as a commercial artist. By the early 1960s, Jarrell was exhibiting his work widely throughout the Midwest. Meanwhile, the explosive social atmosphere of the era left him wanting to create art that was pertinent to the social movements of the day, the Civil Rights Movement and black liberation struggle. Jarrell joined the Organization of Black American Culture (OBAC), a group that created Chicago's Wall of Respect mural, a seminal piece in the 1960s urban mural movement. It was there that he met his future wife, Elaine Annette (Jae) Johnson, a clothing designer. With the eventual breakup of the Artists' Workshop of OBAC, Jarrell and fellow artists Jeff Donaldson and Barbara Jones-Hogu, among others, formed a collective called COBRA-Coalition of Black Revolutionary Artists, which later became AFRI-COBRA, the African Commune of Bad Relevant Artists. AFRI-COBRA took as its central tenets black pride, social responsibility and the development of a new diasporic African identity.

In 1971, Jarrell was recruited by fellow AFRI-COBRA founder, Jeff Donaldson to teach at Howard University where he pursued his Master of Fine Arts degree. He continued there until 1977, taking a position at the University of Georgia as Assistant Professor. In 1988, with the interest in his work increasing, Jarrell retired from teaching altogether. Jarrell's work has been shown at numerous places including: the Smithsonian International Gallery, the Museum of Contemporary Art in Chicago and at festivals and exhibitions in Nigeria, Germany, Sweden, France, Haiti and Martinique.

See how Wadsworth A. Jarrell, Sr. is related to other HistoryMakers
Donate Now
Click Here To Explore The Archive Today!