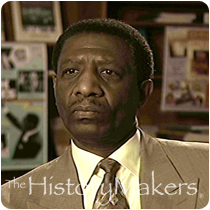 See how Wade Hudson is related to other HistoryMakers
Donate Now

Children’s book publisher and author Wade Hudson, Jr. was born on October 23, 1946 in Mansfield, Louisiana, the first of eight children to Wade and Lurline Hudson. Hudson grew up in Mansfield and attended Desoto High School, graduating in 1964. He went on to attend Southern University in Baton Rouge, Louisiana, where he became involved in the Civil Rights Movement in the mid-1960s. Hudson worked for several civil rights organizations in the South and was one of the “Baton Rogue Three,” three African American men falsely arrested because of their involvement with civil rights activities. He has also worked as a newspaper reporter, a public relations specialist and served as executive director of Pure Energy Music Publishing, a music publishing company he owned with his brothers. The company gave Madonna the hit song, “Holiday.” Hudson earned a certificate from the Channel 13 film and television program in New York City in 1975. The program was established to provide opportunities for minorities in the film and television industry. Hudson is also an established playwright, having authored a number of plays that have been performed on the professional stage. They include Sam Carter Belongs Here, A House Divided and A Black Love Story.

Hudson met his wife, Cheryl Willis Hudson, in 1971, while visiting Boston, Massachusetts. The couple was married in 1972 in Portsmouth, Virginia, Cheryl Hudson’s hometown. They gave birth to their first child, Katura in 1976. Unable to find African American art to adorn their daughter’s nursery, Mrs. Hudson decided to create her own designs. Ultimately, she was inspired to create a children’s book, and although she and Hudson attempted to shop it around to various publishing companies, they were unsuccessful. In 1982, the couple’s second child, Stephan J. Hudson, was born, and three years later, the Hudson’s again revived their idea of creating African American children’s art.

In 1985, the Hudsons developed the AFRO-BETS kids, black characters who twist themselves into the shape of the alphabet. Two years later, after further rejections from various publishers, they invested $7,000 and self-published AFRO-BETS ABC, which featured the AFRO-BETS Kids. The couple received attention from leading education magazines and black bookstores, which carried the books. After the AFRO-BETS books sold out within three months, the Hudsons decided to establish their own publishing company, Just Us Books, Inc. It is now one of the most successful Black owned publishing companies in the world, publishing books and educational material for children focusing on black history, experiences and culture. Just Us Books, Inc. is the only Black owned publishing company that focuses exclusively on publishing Black interest books for children and young adults.

Hudson serves as president of the company, managing the business and marketing responsibilities, while Cheryl handles serves as editor. Because of Hudson’s marketing success with Just Us Books, major companies such as Harper Collins and Scholastic, Inc. hired him as a marketing consultant to boost their sales in the African American market.
In 1990, Just Us Books, Inc. introduced a bi-monthly newspaper for young people entitled Harambee, which would later win a Parent's Choice Award. The company landed its first major account, a $40,000 order with Toys 'R'Us. Throughout the 1990s, the couple continued publishing critically acclaimed children's literature, including Afro-Bets Book of Black Heroes (1989), the company’s biggest seller to date, Bright Eyes, Brown Skin (1990) and Ziggy and the Black Dinosaurs and Kid Caramel, the first contemporary mystery series that would focus on young, black male characters. In 1997, Income Opportunities Magazine named Hudson and his wife, “Small Business Pioneers of the Year.” The Hudsons have received many awards for their contributions to young people, literature and to their community. In 2004, the Hudsons began the Sankofa imprint, which publishes books by outstanding African American writers and authors that are no longer in print. Books by such noted authors as James Haskins, Rosa Guy, Camille Yarbrough and Eleanora E. Tate have been republished.

Hudson is also a celebrated author. His books have been published by his own company and by publishers such as Scholastic, Abingdon Press and Children’s Press. Some of the books authored by Hudson include Powerful Words: More Than Two Hundred Years of Extraordinary Writing by African Americans, Pass It On, African American Poetry for Children, Jamal’s Busy Day and The Underground Railroad. He has received numerous awards and honors, including the Stephen Crane Award for his writing, and he was inducted into the International Literary Hall of Fame for Writers of African Descent in 2004. Hudson serves on many boards, including the Langston Hughes Library at the Children’s Defense Fund and he is a Deacon at his church, Imani Baptist Church in East Orange, New Jersey. He lectures around the country on topics such as writing, publishing, black history and culture and black empowerment.

Wade Hudson was interviewed by The HistoryMakers on April 28, 2007.

See how Wade Hudson is related to other HistoryMakers
Donate Now
Click Here To Explore The Archive Today!