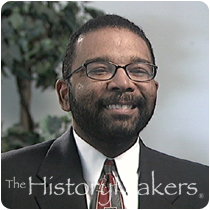 See how W. Gregory Wims is related to other HistoryMakers

William Gregory Wims was born on September 2, 1949 in Bethesda, Maryland. His mother worked as a domestic and his father was a laborer. He earned his high school diploma from Gaithersburg, High School in 1968, where he played on the track and football teams and was active in civil rights sit-ins.

From 1968 until 1970, Wims attended Montgomery College in Rockville, Maryland. In 1969, he was named the Vice President of the Maryland Youth Commission. In 1970 he transferred to Howard University but left before earning his degree.

In 1972, Wims was hired as the coordinator for the Extension Service for the 4-H Club of Montgomery County. In 1974, he became the first male Head Start Teacher in Montgomery County and worked on Republican Newton Stears’ campaign for Congress. From 1976 until 1978, he worked as Stears’ legislative assistant and became the first African American professional from Montgomery County to work on Capitol Hill. In 1978, Wims became a legislative assistant for Congressman Melvin Evans. From 1981 until 1989, he worked in the legislative affairs office for the Secretary of Agriculture and a Special Assistant to the Director for Minority Affairs and Economic Development. In 1989 he started his consulting firm, Hammer and Nails, which assists local businesses in working with the federal government.

In the early 1990s, Wims served as the membership chairperson for the NAACP, recruiting more than a thousand new members. In 1994, he was elected president of the Montgomery County Chapter of the NAACP. During his tenure, he was successful in highlighting discrimination claims of African American employees at the National Institutes of Health (NIH). The NIH case received local and national media coverage and led to Wims becoming president of the Maryland NAACP chapter. In 1996, Wims founded the Victims Rights Foundation (VRF), an organization providing financial and emotional support to crime victims. Through the VRF Wims was able to provide thousands of dollars to the families of the Washington, D.C. sniper victims in 2003.

See how W. Gregory Wims is related to other HistoryMakers
Click Here To Explore The Archive Today!