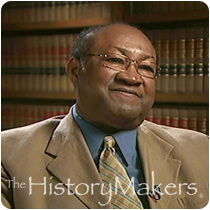 Civil rights activist and lawyer W. George Allen was born on March 3, 1936 in Sanford, Florida to Lessie Mae Williams and Fletcher Allen. Allen was raised by his mother and stepfather, Bruce Brown. Allen grew up in a segregated community in Sanford, Florida; attended Midway Elementary and Junior High Schools; and graduated from Crooms High School in 1964. Allen went on to Florida A&M University in Tallahassee, Florida where initially, he wanted to be a physician. He however played the role of a lawyer in a school play, which made his career plans change. In 1958, he earned his B.S. degree in political science and minored in economics. Then, in 1962, Allen earned his J.D. degree from the University of Florida Law School. He was the first African American to do so.

Between 1958 and 1960, Allen served in the U.S. Army as a special agent in the Counter Intelligence Corps. He attained the rank of first lieutenant when he was honorably discharged. While in law school, Allen got involved with social activism when he organized lunch counter sit-ins in and around Gainesville, Florida. After receiving his law degree, Allen filed a suit that led to the integration of Broward County’s public accommodations and public school system. In 1963, Allen and his family moved to Fort Lauderdale after he passed the bar exam and was admitted to the Florida Bar Association. Allen was hired at the law firm of Orr & Kaplan. After six months there, Allen started his own law practice where he has practiced for forty-two years. Allen specializes in trial work, probate, personal injury, insurance defense and wrongful death.

Allen is a member of several organizations, boards and associations including the Urban League of Broward County, the NAACP, Alpha Phi Alpha Fraternity, Inc., the University of Florida Foundation, the Florida Bar Association, and serving as Broward County Bar Association’s president. Allen has also received numerous awards for his achievements including the University of Florida Distinguished Alumnus Award in May, 2000 and the National Conference for Community and Justice Silver Medallion Award in 2001. In July of 2003, he was inducted into the National Bar Association’s Hall of Fame. In February of 2005, Allen was appointed by Governor Jeb Bush to the Florida A&M University’s Board of Trustees.

Allen was married to Enid Allen, and they lived in Florida.

W. George Allen was interviewed by The HistoryMakers on February 17, 2006.