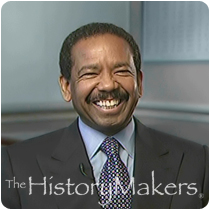 See how W. Frank Fountain is related to other HistoryMakers
Donate Now

Born in Brewton, Alabama, on July 17, 1944, W. Frank Fountain, Jr., was the eldest of Willie Frank and Janie Fountain’s seven children. The Fountain family ran a small farm in Tunnel Springs, Alabama, where Fountain learned the value of “working hard and working smart;” he brought those skills with him to Hampton University, where he earned his B.A. degree in history and political science in 1966.

From 1966 to 1968, Fountain served as a Peace Corps volunteer in West Bengal, India, where he employed the lessons he had learned on his family’s farm to aid in the improvement of agricultural techniques. In India Fountain also worked with craftspeople to extend their base of customers through innovative marketing strategies.

In 1973, Fountain received his M.B.A. from the University of Pennsylvania’s Wharton School of Business and accepted the position of Investment Analyst at Chrysler Corporation. Over the next twenty years, Fountain rose through the ranks, working in the Corporate Controller’s Office, the Treasurer’s Office, and the Government Affairs Office in Washington, D.C.

In 1995, Fountain was appointed vice president for government affairs, and in 1998 he became the senior vice president for government affairs for DaimlerChrysler. In this capacity, Fountain was able to combine his academic training with his business experience while he maintained communication between DaimlerChrsyler and government officials. Fountain’s position also enabled him to exercise his commitment to community service, due to his responsibilities for community relations and educational programs, and his service as president of the DaimlerChrysler Corporation Fund.

Fountain further demonstrated his commitment to service through his activities as chairman of the board for the Corporate Council on Africa, Hampton University, and the Detroit Public Schools Board of Education. Fountain served as vice chairman of the board for the Joint Center for Political and Economic Studies; the Detroit Regional Chamber of Commerce; Citizens Research Council of Michigan; and New Detroit, Inc. Fountain was also a board member of Africare; the Wharton School of Business; the Museum of African American History; and the Hudson-Webber Foundation. For his contributions to society, Fountain was awarded an honorary doctorate of public service from Central Michigan University.

See how W. Frank Fountain is related to other HistoryMakers
Donate Now
Click Here To Explore The Archive Today!