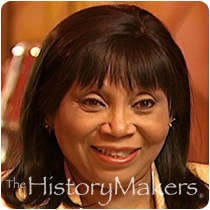 See how Vy Higginsen is related to other HistoryMakers
Donate Now

Producer, author, playwright and radio personality, Vy Higginsen has been instrumental in making a place for minorities and women in the media and the arts. Higginsen was born in Harlem on November 16th, to a minister father and devout Christian mother. Even though her father died when she was an infant, the family continued their involvement in the church where a young Higginsen was profoundly influenced by its sights, sounds and vocal traditions.

Higginsen attended the Fashion Institute of Technology in New York, believing that she wanted a career as a buyer. Not long after, she decided that the fashion industry was not for her and was hired by Ebony Magazine, becoming its first female sales representative. During her tenure there, Higginsen became increasingly interested in radio and enrolled at a school for broadcasting. The well-known radio personality Frankie Crocker recruited Higginsen to WBLS. She became the first woman on prime time radio. During this time, Higginsen also launched a lifestyle magazine, Unique NY.

It was while vacationing in the Caribbean that Higginsen and husband Ken Wydro developed the idea of writing a musical partially based on the life of Higginsen's sister, well-known African American singer Doris Troy. Debuting in 1983, Mama I Want To Sing, became the longest running black off-Broadway musical. Higginsen also co-wrote and produced Sing! Mama 2 and Born to Sing! Mama 3. As an author, Higginsen's published works include: Mama I Want to Sing, This is My Song, and The Positive Zone and Harlem Is.

Higginsen is presently studying for the ministry and serves as the CEO of the Mama Foundation for the Arts, an organization dedicated to the preservation of gospel music and black history.

See how Vy Higginsen is related to other HistoryMakers
Donate Now
Click Here To Explore The Archive Today!