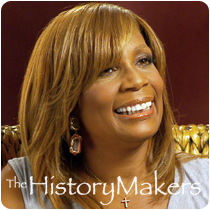 Music executive Vivian Scott Chew was born in the Queens, New York neighborhood of Far Rockaway to Mamie Murphy and William Scott on May 14, 1958. She attended Georgetown University from 1976 to 1977. Chew then entered into the music business as an office assistant for entertainment attorney Louise West. Chewalso served as a personal assistant to singer, songwriter and producer Kashif, renowned for producing music for notable artists such as Whitney Houston and Evelyn “Champagne” King. From there, Chew was named president of the American Society of Composers, Authors and Publishers (ASCAP) in 1985, the first African American woman to head the organization. While at ASCAP she created the Rhythm & Soul Awards, an event that has been in existence for more than twenty years. She was then hired as the head of artists and repertoire (A&R) for Polygram Records in 1987, where she signed internationally acclaimed reggae band Third World. After two years with Polygram, Chew was named vice president of urban music for Sony/550 Records. She was then named vice president of artists and repertoire (A&R) for Epic Records from 1991 to 1997. While at Epic she signed reggae artist Shabba Ranks, a then unknown who rose to international superstardom under Chew. Ranks’ debut album for Epic became the first reggae album to top Billboard’s R&B chart and snagged him the Grammy Award for Best Reggae Album in 1991.

Chew went on to launch her own music company, TimeZone International, three years later. Through TimeZone Chew markets urban music acts to global audiences. Her clients have included notable R&B acts such as Jill Scott, Brain McKnight and India.Arie. Through Chew Entertainment, a company she co-owns with her husband, arranger, producer and musical director, Ray Chew, provides direction and musical support for new and emerging artists.

Vivian Scott Chew is also recognized for her advocacy of juvenile diabetes careand prevention. She serves on the board of directors for Juvenile Diabetes Research Foundation of North Jersey and Rockland Counties. In 1993, she co-founded the Juvenile Diabetes Foundation Music Industry Dinner, which raised $2 million for research for a cure. Additionally, Chew serves on the Board of Directors for the Black Rock Coalition and is a former board member of the Winston Preparatory School in New York City. Chew is married and resides in Teaneck, New Jersey.

Vivian Chew was interviewed by The HistoryMakers on May 18, 2012.

See how Vivian Scott Chew is related to other HistoryMakers
Donate Now
Click Here To Explore The Archive Today!