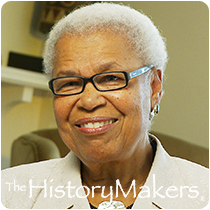 See how Vivian R. Johnson is related to other HistoryMakers
Donate Now

Retired educator Vivian R. Johnson was born in Chicago, Illinois and grew up in Los Angeles, California where she graduated from Polytechnic High School in 1952 and entered the University of California at Los Angeles (UCLA). In 1955, she became the first African American elected as a Women’s Representative on the Student Council. Influenced by the UCLA University Religious Conference (URC), Johnson was chosen to participate in the URC sponsored Project India in 1953 where she worked with Indian students to build a one-room school house in a village near Calcutta, India. Following receipt of her B.A. degree in English/Speech from UCLA in 1956 and a year of graduate studies, she traveled to the East Coast with her husband, Willard R. Johnson. For four years, she served as a scholarship assistant placing students from newly independent African nations in American universities for the Africa-American Institute in Washington, D.C. and Harvard University’s African Scholarship Program of American Universities.

From 1968 to 1972, Johnson served as a social studies curriculum writer for the Newton Massachusetts Public Schools. In Boston, Massachusetts, she founded a resource center on African American culture and directed Reading is Yours to Keep, Inc. from 1973 to 1978 in which parents were trained to tutor students. In 1974, she received the Certificate of Advanced Study and in 1975 the Doctorate in Education in Administration, Planning and Social Policy from the Harvard Graduate School of Education.

From 1976 to 1980, Johnson served as a consultant to a number of educational institutions including multicultural film evaluation for WGBH Boston, curriculum development for University of Nairobi and Kenyatta University College and school-staff development for Boston University’s African Studies Outreach Program. After serving as Co-Coordinator of the Collaborative Planning Study for the College and University Planning Program with the Boston Public Schools, in 1980, Johnson began a six-year tenure as the Campus Coordinator for Boston University School of Medicine’s Strengthening Health Delivery Systems Program operating in twenty countries in central and west Africa.

In 1987, Johnson was a Scholar in Residence at the Rockefeller Foundation Bellagio Center in Bellagio, Italy, where she completed the book West African governments and volunteer development organizations : priorities for partnership, co-authored with her husband. In 1989, she joined the faculty at Boston University’s School of Education as an Associate Clinical Professor in the Department of Administration, Training and Policy Studies. During her time at Boston University, Johnson received the prestigious Fulbright Summer Seminar Award to study multicultural education in Indonesia.

After retiring from Boston University as Associate Professor Emerita in 2003, Johnson’s work in her specialties continued. In 2005, she joined her colleagues in teaching a summer course in Geneva, Switzerland, and she co-authored a book on family, school and community partnership in education published in 2007.

Throughout her career, Johnson has been involved with numerous civic organizations including serving on the Board of Directors of the Trust for Public Land, National Audubon Society, Oxfam America and the National Center of Afro-American Artists.

Vivian R. Johnson was interviewed by The HistoryMakers on September 13, 2007.

See how Vivian R. Johnson is related to other HistoryMakers
Donate Now
Click Here To Explore The Archive Today!