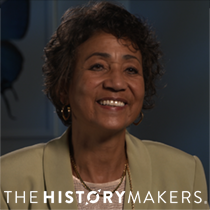 Government administrator and jazz singer Vivian Male was born on July 13, 1949 in Boston, Massachusetts to Frances Lesueur Cromwell and Anthony Cromwell. She graduated from Jeremiah E. Burke High School and Boston Business School in Boston, Massachusetts; and went on to study voice at the Elma Lewis School of Fine Arts in Boston. Later, she received her M.Ed. degree in management and administration from Cambridge College in 1980. Male also graduated from the National Judicial College in Reno, Nevada in 1988.

In 1973, Male worked as the special assistant to then U.S. Senator Edward Brooke. In this role, she focused on issues of education. In 1979, Male became the deputy director of the Community Economic Development Assistance Corporation; and in 1988, Male was appointed by Governor Michael Dukakis to serve as an administrative judge for workers’ compensation issues in the Commonwealth of Massachusetts. From there, Male went on to serve as a senior policy maker for the Commonwealth of Massachusetts, and as chairperson of the Appeals Board of Unemployment Insurance. In 1991, Male and several other women in Boston, including Callie Crossley, Dianne Wilkerson and Sarah-Ann Shaw, formed the Boston chapter of the Coalition of 100 Black Women. Now known as the Boston Coalition of Black Women, Inc. Male was then named director of equal opportunity operations at the Massachusetts Housing Finance Agency in 1996. In 2000, Male was named director of equal opportunity at MassHousing.

Also, in 2000, Male made her recording debut on the collaborative album Boston Sings Out and later founded Vivian Male Productions through which she produced her music. She also performed at venues like the Berklee College of Music and the Negro Ensemble Company in New York City. In 2009, Male released her debut solo album, Our Day Will Come.

Male served as president of the Middlesex County Chapter of The Links, Incorporated, and was appointed to the board of trustees at Berklee College of Music in 1998. She was also a founding member of the Legacy Society at the Museum of African American History - Boston and Nantucket, and served on the Governor’s Advisory Committee on Women’s Issues. Male continued to perform throughout the Boston area, and was inducted into the Steppin’ Out Hall of Fame in 2007 at the Dimock Health Center alongside singer/songwriter George Benson. She was also a featured vocalist at the New England Emmy Awards, and performed the National Anthem for the New England Patriots several times.

Vivian Male was interviewed by The HistoryMakers on August 10, 2018.