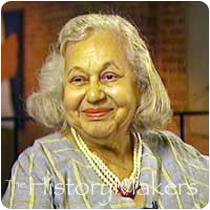 See how Vivian D. Hewitt is related to other HistoryMakers

Art lover and librarian Vivian Hewitt was born on February 17, 1920, in New Castle, Pennsylvania. Hewitt was the fourth of five children, her elder siblings all born in North Carolina. Her father, Arthur, was a skilled laborer, and her mother, Lela, worked as a teacher and housewife. After completing high school, Hewitt attended Geneva College in Beaver Falls, Pennsylvania, where she earned a B.A. in 1943. The following year, she graduated from Carnegie-Mellon University in Pittsburgh with an M.S. in library science. She attended the University of Pittsburgh for further graduate studies in 1947 and 1948. Geneva awarded her an honorary degree in 1978.

Hewitt began her career working in libraries in 1944, when she was hired by the Carnegie Library in Pittsburgh as the senior assistant librarian. Relocating to Atlanta in 1949, Hewitt took a position as a librarian and instructor at Atlanta University's School of Library and Information Science. Hewitt and her husband, John, had a son in 1952, and Hewitt returned to work in 1954 as a researcher for Crowell-Collier Publishing. Hewitt joined the Rockefeller Foundation in 1956, and in 1963 she was hired by the Carnegie Endowment for International Peace to serve as chief librarian. She remained there until her retirement in 1983. Since then, she has served on the Council on Foreign Relations and on the faculty of the University of Texas at Austin.

A lover of travel, Hewitt and her husband began buying works of art wherever they would go, and gave them as gifts on special occasions. They began their collection in earnest by collecting Haitian art for fifteen years. Living near and knowing many of the African American artists from New York, they began to collect their works, as well. In recent years, the collection, considered one of the finest of African American art in the world, was bought by Bank of America and given as a gift to the Afro-American Cultural Center in Charlotte, North Carolina.

Hewitt is also active in other areas, serving on the Board of Governors of the Laymen's Club of the Episcopal Church of the Diocese of New York, and has served as the secretary of the board of the Graham Windham Child Care & Adoption Agency. She has also received the Distinguished Service Award of the Black Caucus of the American Library Association and has been inducted into the Hall of Fame of the Special Library Association.

See how Vivian D. Hewitt is related to other HistoryMakers
Click Here To Explore The Archive Today!