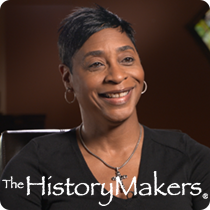 Favorite Color:
Blue
Favorite Food:
Pizza
Favorite Time of Year:
Summer
Favorite Vacation Spot:
Aruba
Favorite Quote:
If You Can Dream It, You Can Be It.

Favorite Color:
Blue
Favorite Food:
Pizza
Favorite Time of Year:
Summer
Favorite Vacation Spot:
Aruba
Favorite Quote:
If You Can Dream It, You Can Be It.

See how Violet Palmer is related to other HistoryMakers

After graduating from California Polytechnic University Pomona in 1987, Palmer worked for Placentia Recreation Department, where she began refereeing high school basketball games. In 1991, she officiated her first Division I Women’s basketball game and, officiating the NCAA Women’s Final Four from 1994 to 1997. In 1995, Palmer began training as an official for the NBA. In 1997, Palmer officiated the Women’s National Basketball Association (WNBA) championship during the association’s inaugural season. That same year, Palmer made history as the first woman to referee a National Basketball Association game. She became the first woman to oversee a postseason game for the NBA in 2006, when she officiated a postseason matchup between the Indiana Pacers and the New Jersey Nets. From 2009 to 2010, Palmer served as the coordinator of Women’s Basketball Officiating (WBBO) for the West Coast and Pac-12 Conferences. She became the first woman to officiate an All-Star Game in any major United States sport, when she officiated the 2014 NBA All-Star Game at Smoothie King Center in New Orleans. Palmer retired as a referee from the NBA in 2016, after dealing with a long time knee injury. Over the course of her NBA career, Palmer officiated 919 NBA games. Palmer was also the first openly gay referee in NBA history.

Palmer received many awards and honors during her career, including being named a member of the NCAA Division II 40th Anniversary Tribute Team. She was also honored with the 2013 WNBA Boost Mobile Pioneer Award, and served on the board of the National Association of Sports Officials. In 1999, Palmer was named Naismith Women’s College Official of the Year.

Palmer and her wife, Tanya Stine, have three children.

Violet Palmer was interviewed by The HistoryMakers on November 17, 2016.

See how Violet Palmer is related to other HistoryMakers
Click Here To Explore The Archive Today!