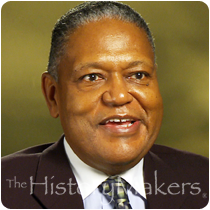 See how Vincent Lane is related to other HistoryMakers
Donate Now

Real estate executive and real estate developer Vincent Lane was born on March 29, 1942 in West Point, Mississippi to Doyle Lane and Bertha Lee. He grew up on the southside of Chicago and graduated from Tilden Technical High School in 1960. Lane earned his B.S. degree in business administration from Roosevelt University in 1968. After earning his undergraduate degree, he worked in the accounting departments of several companies including Mt. Sinai Hospital, International Harvester and U.S. Steel. Lane received his M.B.A degree from the University of Chicago in 1973.

After completing his education, Lane became senior vice president of the Woodlawn Community Development Corporation (WCDC). In 1976, Lane served as the president and general manager of Urban Services and Development, Inc. and LSM Venture Associates housing management companies. In 1988, Lane was appointed by managing director and chairman of the Chicago Housing Authority (CHA). As chairman, he re-organized the CHA creating new programs such as the Chicago Housing Authority Police Department and Operation Clean Sweep. In 1991, Lane became president of American Community Housing Associates, Inc. Lane resigned from the CHA in 1995 after serving seven years as chairman. From 1997 to 2002, Lane served as president of Affordable Community Housing Advocate, LLC. In 2004, Lane became CFO of Woodlawn Community Development Corporation and since 2006, he has been a consultant responsible for the management of WCDC's real estate development program.

Lane has served on the boards of several organizations including the Corporation for Supportive Housing, National Historic Trust, Women's Treatment Center, Urban Land Institute and Roosevelt University. He received much recognition for his work in affordable housing development including the Regional Award for Minority Developer of the Year from the United States Department of Housing and Urban Development, the Distinguished Public Service Award from the Anti-Defamation League and the Visionary Award from the Boys and Girls Club. Lane is married to Rita Denise Vargas and has three adult children Vincent, Steven and Craig.


Vincent Lane was interviewed by The HistoryMakers on January 18, 2012.

See how Vincent Lane is related to other HistoryMakers
Donate Now
Click Here To Explore The Archive Today!