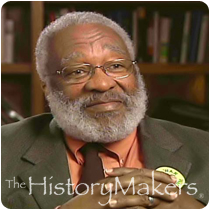 See how Vincent Harding is related to other HistoryMakers
Donate Now

Theologian, author, and civil rights activist Vincent Gordon Harding was born on July 25, 1931, in New York City. Harding’s mother grew up in Barbados before coming to New York City. As a child, Harding developed a strong relationship with the church as a member of the Victory Tabernacle Seventh Day Christian Church in Harlem.

As a student, Harding was interested in journalism. In 1948, he received his diploma from Morris High School in the Bronx and entered the City College of New York, where he became the first African American editor of the college’s newspaper. Harding received his B.A. degree in history from the City College of New York and continued his studies at Columbia University where he received his M.A. degree in journalism in 1953. That same year, Harding was drafted into the United States Army where he served at Fort Dicks in New Jersey. During that time, he became more drawn to the bible. Upon being discharged from the Army, Harding attended the University of Chicago where he received his PhD in the history of Christianity and became a lay pastor at a small church in Chicago.

During the 1960s, Harding was a civil rights activist with the Southern Freedom Movement. He was also a close associate and speechwriter for Dr. Martin Luther King, Jr. Harding was the first director of the Martin Luther King, Jr., Center in Atlanta, Georgia. He also taught at Spelman College. Serving as senior academic advisor, he has worked for film and television projects including the PBS television series Eyes on the Prize.

While a founder and co-chair of the Veterans of Hope Project, Harding produced videotapes that feature African Americans whose work personifies the ongoing struggle for human rights. In addition, he is the author of numerous essays and nine books, which include Hope and History: Why We Must Share the Story of the Movement in 1990; There is a River: The Black Struggle for Freedom in America in 1993; and Martin Luther King: The Inconvenient Hero in 1995.

As Professor of Religion and Social Transformation at the Iliff School of Theology in Denver, Colorado, Harding continues to teach and serve as lecturer and advisor to churches, synagogues, schools, prisons and community groups.

See how Vincent Harding is related to other HistoryMakers
Donate Now
Click Here To Explore The Archive Today!