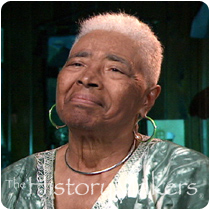 Favorite Color:
Red
Favorite Time of Year:
Winter
Favorite Vacation Spot:
Anywhere New
Favorite Quote:
The World Shrinks Or Expands In Relation To How We Choose To Live In It.

Favorite Color:
Red
Favorite Time of Year:
Winter
Favorite Vacation Spot:
Anywhere New
Favorite Quote:
The World Shrinks Or Expands In Relation To How We Choose To Live In It.

See how Victoria Adams is related to other HistoryMakers
Donate Now

Victoria Jackson Gray Adams was born Victoria Jackson on November 5, 1926 in Hattiesburg, Mississippi. Her mother died when Adams was just three years old, and she was raised on her paternal grandparents’ farm. In 1945, she earned her high school diploma from DePriest Consolidated School and went on to attend Wilberforce University from 1945 until 1946, but had to return home to Mississippi when the family could no longer afford tuition.

Despite not having a degree, Adams was able to find work as a teacher in Mississippi. This led to her civil rights activities when she began teaching voter registration classes in the early 1960s. In 1962, Adams became a full time civil rights activist when she became field secretary of the Student Nonviolent Coordinating Committee (SNCC). Her efforts would enable her to lead a boycott against Hattiesburg businesses and prepare the city for Freedom Summer 1964. Although married with three small children, Adams helped organize the alternative Mississippi Freedom Democratic Party (MFDP). In 1964, Adams, along with fellow activists Fannie Lou Hamer and Annie Devine, were chosen as the national spokespersons for the MFDP and attended the Democratic Convention in Atlantic City. Although they were not seated, their efforts did lead to the Democratic Party integrating its ranks. In 1968, the three women were seated guests on the floor of the U.S. House of Representatives. Adams was also the first woman to run for national office in Mississippi. In 1968, Adams left the country with her second husband and moved to Thailand where she continued to fight against racism and discrimination against African American soldiers and their families.

Adams received numerous awards and honors for her activism. She was featured in the award-winning documentary Eyes on the Prize and several books. She was active in the SCLC and several other human rights organizations. Adams was also an adjunct professor at the University of Southern Mississippi.

See how Victoria Adams is related to other HistoryMakers
Donate Now
Click Here To Explore The Archive Today!