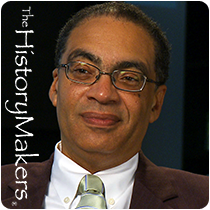 See how Victor McCrary is related to other HistoryMakers

Chemist and education administrator Victor R. McCrary was born and raised in Baltimore, Maryland and graduated from DeMatha Catholic High School in Hyattsville, Maryland in 1973. After receiving his B.A. degree in chemistry from The Catholic University of America in 1978, McCrary enrolled in Howard University and graduated with his Ph.D. degree in physical chemistry in 1985. He also earned his M.S. degree in engineering and technology management from the University of Pennsylvania in 1995.

In 1985, McCrary was hired as a member of the technical staff at AT&T Bell Laboratories where he conducted research on crystal growth of semiconductor lasers. From 1995 to 2003, he served as chief of the Convergent Information Systems Division at the National Institute of Standards and Technology (NIST). While there, McCrary headed the research & development program as well as the development of technical standards in areas such as biometrics, digital preservation, DVD reliability, digital TV, quantum communications, and electronic books. McCrary was employed at the Johns Hopkins University Applied Physics Laboratory (APL) from 2003 to 2012. He was then appointed as vice president for Research and Economic Development at Morgan State University. In this position, McCrary was responsible for developing a comprehensive research strategy for Morgan State University and undertook such initiatives as encouraging cross disciplinary research, expanding the current base of external research programs, and developing opportunities to increase the University’s intellectual property portfolio.

McCrary has served as the chair and past-president for the Open Electronic Book Forum, an industry group dedicated to the development and promotion of standards for electronic books. He served on the advisory boards for several technology centers, including the Center for Advanced Nanoscale Materials at the University of Puerto Rico and the Center for Hierarchical Manufacturing at the University of Massachusetts. McCrary organized the world’s first conference on electronic books in October 1998, and was elected national president of NOBCChE in 2007.

McCrary has received numerous awards, including the Gold Medal from the Department of Commerce, the Percy E. Julian Award from the National Organization for the Professional Advancement of Black Chemists and Chemical Engineers (NOBCChE). In 2005, he was featured in Science Spectrum magazine as one of the Top 50 Minorities in Science; and, in 2007, McCrary was elected to the 2007 DVD Hall of Fame by the DVD Association. U.S. Black Engineer & Information Technology magazine selected McCrary as the “Scientist of the Year” in the Black Engineer of the Year Awards in 2011. McCrary is a member of the Library of Congress’ National Digital Strategy Advisory Board He is a Fellow of the African Science Institute and a lecturer in the University of Pennsylvania's Executive Masters of Technology Management program. Victor has authored or co-authored over 60 technical papers in refereed journals and co-edited two books.

Victor R. McCrary was interviewed by The HistoryMakers on August 5, 2013.

See how Victor McCrary is related to other HistoryMakers