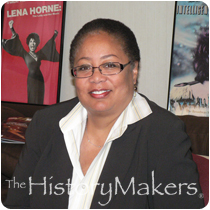 See how Veronica Claypool is related to other HistoryMakers

In 1973, Claypool worked on the production team for the tour and live broadcast of the Jackson 5 from Senegal, West Africa. One year later, Claypool became an associate producer for Metromedia Television in New York City, producing such programs as Midday Live, a daily talk show, Wonderama, a live children’s show and People of Paradise, a documentary filmed in the U.S. Virgin Islands. Claypool joined McCann and Nugent Productions in 1977, working as company manager for over twenty Broadway productions, which included Mass Appeal, Dracula and The Gin Game, as well as the original 1976 Houston Grand Opera European tour of Porgy and Bess. In 1981, Claypool left McCann and Nugent when she was employed as manager for the Broadway and national tours of Lena Horne: The Lady and Her Music, including a live broadcast of the performance from the Nederlander Theatre on Broadway. In 1983 and 1984, Claypool was general manager for the Las Vegas national and international tours of the show, Sophisticated Ladies. Upon completion of this tour, Claypool worked as general manager, for The Search for Signs of Intelligent Life in the Universe, starring Lily Tomlin. 1988 marked Claypool’s move to Los Angeles where she worked as general manager for the Center Theatre Group/ Ahmanson and Doolittle Theatres, working on such performances as Les Liaisons Dangereuses, Phantom of the Opera, Into the Woods, and August Wilson’s The Piano Lesson. In 1990, Claypool worked as assistant production auditor for the Columbia-Tri Star release The Fisher King. The next year, Claypool moved to Blanki & Bodi Productions, working on such pieces Tube Test Two for ABC Productions and Silent Killer: Women and Heart Disease for the American Heart Association. For the next two years, Claypool was the general manager for OBA OBA, a Brazilian production that toured both nationally and internationally.

Claypool managed the Houston Grand Opera tour of Porgy and Bess. After managing this tour, she served as general manager of the Jackie Mason show, Love Thy Neighbor. In 1997, she became managing director of Theatre Development Fund, the country’s largest nonprofit theatrical service organization. In 2005, Claypool married John Gordon Butler in Kona, Hawaii.

See how Veronica Claypool is related to other HistoryMakers
Click Here To Explore The Archive Today!