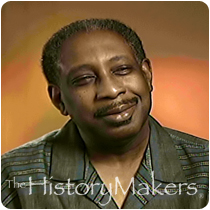 See how Vernon Smith is related to other HistoryMakers

Journalist and author Vern E. Smith was born Vernon Emile Smith on February 13, 1946, in Natchez, Mississippi, where he spent the majority of his youth. Smith attended San Francisco State University, where he was a member of the school’s Black Student Union and served as sports editor and columnist for the campus daily newspaper. Smith met his wife in 1967, graduated from San Francisco State University in 1969, and, soon after, attended the Summer Program for Minority Journalists at the Columbia University Graduate School of Journalism.

In the summer of 1969, Smith joined the staff of the Independent, Press-Telegram in Long Beach, California. Smith joined Newsweek as a correspondent in 1971 after being recruited by John L. Dotson Jr., the magazine's then Los Angeles bureau chief, the first African American to hold that title. Smith was assigned to the Detroit bureau where he learned from veteran writers Jim Jones and Jon Lowell. Smith won the Detroit Press Club Foundation’s annual magazine writing award for a Newsweek article entitled “Detroit’s Heroin Subculture,” which informed his 1974 novel The Jones Men, recommended by the The New York Times and re-published by W.W. Norton in 1998.

Smith wrote numerous articles for several publications including Ebony, Crisis, GEO, The Sunday Times of London, and TV Guide. Smith also contributed to My Soul Looks Back in Wonder: Voices of the Civil Rights Experience, published in May of 2004 as part of the Voices of Civil Rights Project.

See how Vernon Smith is related to other HistoryMakers
Click Here To Explore The Archive Today!