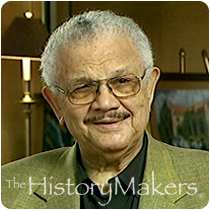 See how Vernon Jarrett is related to other HistoryMakers
Donate Now

Born on June 19, 1918, in Tennessee, Vernon Jarrett was one of the nation's most prominent commentators on race relations and African American history within the United States. Newspaper, television and radio broadcasts have all been forums for his insights. Jarrett began his journalism career at the Chicago Defender,/i> during the 1940's and later worked for the Associated Negro Press before making the transition to radio in 1948. For the next three years, Jarrett and composer Oscar Brown, Jr. produced "Negro Newsfront", the nation's first daily radio newscast created by African Americans.

In 1970, Jarrett became the first African American syndicated columnist for the Chicago Tribune. He used his editorial voice as a forum for commentary on the social and economic trends affecting African Americans, as well as the global concerns of pan-African politics. During this period, Jarrett served as host on Chicago's WLS-ABC TV, where he produced nearly two thousand television broadcasts. In 1983, Jarrett left the Tribune and began writing for the Chicago Sun-Times, where he continued his tradition of political and social commentary, which has always been firmly grounded in the African American experience.

In 1977, Jarrett created the NAACP-sponsored ACT-SO program. An acronym for "Afro-Academic, Cultural, Technological, and Scientific Olympics", ACT-SO is an enrichment program for exceptional African American students nationwide. Through the program, over $1,000,000 in computers, scholarships and books have been awarded to top-ranking students, who are recognized and honored each year during ACT-SO's national television special. To date, hundreds of students across the United States have participated in the annual event.

Jarrett also became a columnist for the New York Times' New American News Syndicate and his social commentary could be heard during "The Jarrett Journal", a news show broadcast on WVON-AM, Chicago's only African American-owned radio station. He was also a member of the editorial board of the NAACP's ninety year-old magazine, The Crisis, which was created by W. E. B. Du Bois. Jarrett's outstanding journalistic efforts have earned him numerous honors and awards, including his being the first recipient of the NAACP's James Weldon Johnson Achievement Award and his 1998 induction into the National Literary Hall of Fame at the University of Chicago's Gwendolyn Brooks Center. Jarrett passed away on May 23, 2004.

See how Vernon Jarrett is related to other HistoryMakers
Donate Now
Click Here To Explore The Archive Today! 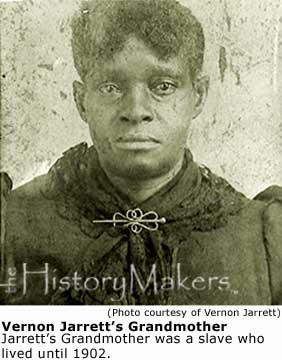 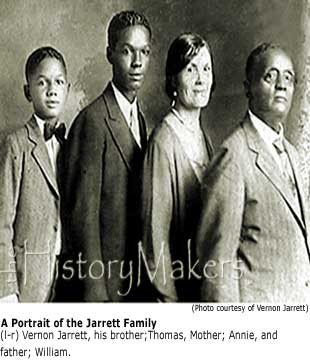