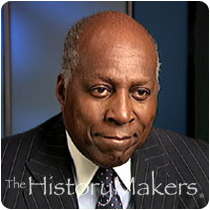 See how Vernon E. Jordan, Jr. is related to other HistoryMakers
Donate Now

Lawyer and Washington power broker Vernon Jordan was born on August 15, 1935, in Atlanta. Graduating with honors from David T. Howard High School in 1953, he went on to attend DePauw University in Greencastle, Indiana, where he was the only African American student in his class. At DePauw, Jordan participated in the student senate, won statewide honors in speaking competitions, played basketball and graduated in 1957. He then entered Howard University School of Law, receiving his J.D. in 1960.

Jordan returned to Atlanta starting his legal career working with the civil rights movement. In 1961, he helped organize the integration of the University of Georgia and personally escorted student Charlayne Hunter through a hostile white crowd. Over the next ten years, Jordan held various positions as a civil rights advocate. He served as the Georgia field secretary for the NAACP; director of the Voter Education Project for the Southern Regional Council; head of the United Negro College Fund; and as a delegate to President Lyndon B. Johnson’s White House Conference on Civil Rights.

In 1971, Jordan was appointed president and CEO of the National Urban League, where he spearheaded the organization’s growth. On May 29, 1980, a white supremacist attempted to kill Jordan. After a successful recuperation, in 1981 Jordan resigned from the National Urban League to take a position as legal council with the Washington, D.C. office of the law firm of Akin, Gump, Strauss, Hauer and Feld. His active practice includes corporate, legislative and international clients. Jordan's close friend is former President Bill Clinton and during Clinton's presidency, Jordan became one of Washington’s most influential power brokers. Currently he is a partner in the investment firm of Lazard Frere & Company in New York.

Jordan has received numerous awards and honors for his work, including the Alexis de Tocqueville Award from the United Way of America in 1977 for his dedication to volunteerism. In 2001, Jordan published his autobiography, Vernon Can Read! to widespread praise. He has also authored a weekly newspaper column syndicated to more than 300 newspapers and serves as a frequent television guest and commentator. Jordan is an active on various corporate boards and has had various presidential appointments.

Jordan and his wife, Ann, reside in Washington, D.C. and have four children.

Jordan was interviewed by The HistoryMakers on January 24, 2003.

See how Vernon E. Jordan, Jr. is related to other HistoryMakers
Donate Now
Click Here To Explore The Archive Today!