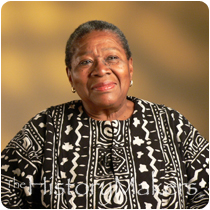 See how Vernell Lillie is related to other HistoryMakers

In 1974, Lillie established the Kuntu Repertory Theatre with the intent to examine Black life from a sociopolitical-historical perspective. Lillie used drama to educate while entertaining. The theatre naturally developed into a supportive community for black writers, actors and artists. Since its establishment, the theatre has sponsored countless activities which highlight the African American community. Lillie has directed many productions including: The Buffalo Soldiers Plus One, Little Willie Armstrong Jones and Whispers Want to Holler.

Lillie has been the recipient of many prestigious awards including the University of Pittsburgh Chancellor’s Distinguished Teaching Award; the Outstanding Award for Women in the Arts by Alpha Kappa Alpha Sorority, Inc.; and the 2003 Career Achievement in Education Award from the Association for Theatre in Higher Education.

See how Vernell Lillie is related to other HistoryMakers
Click Here To Explore The Archive Today!