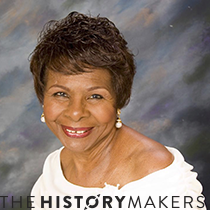 See how Vera Ricketts is related to other HistoryMakers

Pharmacist and civic leader Vera Ricketts was born on October 20, 1922 in Indianapolis, Indiana to Sarah Chilton Phelps and Robert Phelps, Sr. There, Ricketts attended Hazel Hart Hendricks School 37 and Crispus Attucks High School where she graduated in 1941. She later went on to attend Butler University College of Pharmacy and Health Sciences and graduated with her B.S. degree in pharmacology in 1948. As an undergraduate student, she was an active member of the Congress of Racial Equality.

Ricketts began her career as a pharmacist at Howard University in Washington, D.C. In 1958, Ricketts became the first female African American pharmacist at Duke University Hospital in Durham, North Carolina. During this period, she also helped establish the pharmacy at Lincoln Hospital in Durham, where she trained nurse practitioners in pharmacology. Ricketts eventually returned with her husband, William Newton Ricketts, to Washington, D.C., where she worked at the District of Columbia General Hospital pharmacy. In 1960, she and her husband moved to Los Angeles, California, where she worked as an administrator at his medical practice. An active community leader, Ricketts advocated for the creation of the Martin Luther King Jr. General Hospital in Los Angeles’ South Central neighborhood. Ricketts went on to serve as the president of the Auxiliary to the National Medical Association from 1981 to 1982.

In addition to her professional career, Ricketts was also active in other community organizations in the Los Angeles area. In 1979, Ricketts founded the Inglewood Pacific Chapter of The Links, Incorporated, and she served as its chapter president from 1983 to 1985. Ricketts also founded the Theta Mu Omega Chapter of the Alpha Kappa Alpha Sorority. Through her membership in the sorority, she volunteered on the board of the Jenesse Center, Inc., a shelter for battered women and children in Los Angeles. In 2017, Ricketts and her husband, William Newton Ricketts, received recognition for their thirty plus years of humanitarian work in Jamaica.

Vera Ricketts was interviewed by The HistoryMakers on July 23, 2017.

See how Vera Ricketts is related to other HistoryMakers
Click Here To Explore The Archive Today!