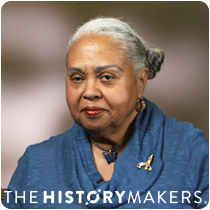 See how Vera F. Wells is related to other HistoryMakers

Television executive Vera F. Wells was born on December 31, 1944 in Pittsburgh, Pennsylvania. She graduated second in her class from Pittsburgh’s Peabody High School in 1963. Wells went on to attend Howard University in Washington, D.C. to study psychology, but left before graduating to move with her husband to New Haven, Connecticut, where she worked for Community Progress, Inc. In 1969, Wells graduated from Yale University with her B.A. degree in psychology in 1971, the first coeducational graduating class. While at Yale University, Wells helped to create a new seminar called The Black Women and the Chubb Conference on the Black Woman, which brought Professor Sylvia Ardyn Boone to the university. Boone would become the first tenured African American woman on the Yale faculty upon her promotion in 1988.

After graduating, Wells became the director for School Volunteers for New Haven, Inc. She spent the summer of 1972 assisting Elga R. Wasserman on the Carnegie Council on Children alongside Sylvia Ardyn Boone, whom she had befriended at Yale University. In the 1970s, Wells spent two years at Harvard University’s John F. Kennedy School of Government in Cambridge, Massachusetts to study organizational management. She then became the associate director of the international division at the National Council of Negro Women where she conducted field research in East and West Africa. After returning to the U.S., Wells accepted a position in promotional research at NBC’s headquarters in New York City. She was eventually promoted to director of audience services. In this role, Wells oversaw the creation and standardization of closed captioning at NBC, following the passing of the Americans with Disabilities Act of 1990. After the death of Sylvia Ardyn Boone in 1993, Wells became the founder and director of the Sylvia Ardyn Boone Memorial Project at Yale University’s Timothy Dwight College. The memorial project houses the collection of Boone’s literary and personal papers and awards both undergraduate and graduate scholarships to students working in the fields of African and African American art.

Wells served as a member of the University Council at Yale University for ten years. Within the council, she was a founding committee member of YaleWomen, Inc. and the Theater Review Committee. Wells also served on the boards of the National Advisory Council of the Yale Black Alumni Association, the Yale Development Board and the Yale Tomorrow Campaign. In 2007, Wells was honored with the Yale Medal for her volunteer service to the university.

See how Vera F. Wells is related to other HistoryMakers