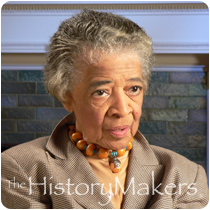 See how Vel Phillips is related to other HistoryMakers

State government appointee Velvalea Hortense Rodgers Phillips was born on February 2, 1924 in Milwaukee, Wisconsin to Russell Lowell Rodgers and Thelma Etha Payne Rodger. Growing up on Milwaukee’s South Side, she attended Garfield Avenue Elementary School, Roosevelt Junior High School, and North Division High School. There, Phillips won a prize for outstanding oratory for her speech, “The Negro and the Constitution,” which she wrote for the Elks Lodge Competition. She subsequently won a scholarship to Howard University in 1942. She earned her B.A. degree from Howard in 1946. Phillips became the first black woman to earn an L.L.B. degree from the University of Wisconsin in 1952.

Phillips became active in the NAACP and supported a redistricting referendum in 1950. Phillips lost a close race for a seat on the Milwaukee Common Council in 1953, but came back to become the first woman to win a council seat in 1956. Frequently involved in civil rights activities, Phillips introduced Milwaukee’s first open housing ordinance in 1962. In 1967, resistance to civil rights agitation turned violent when the NAACP headquarters was firebombed and the non-violent Phillips was the only city official arrested at a rally the next day. Joined by Catholic Father James Groppi and the NAACP Youth Council, Phillips led marches for fair housing in 1968, while riots swept the black community. Finally, that same year, Milwaukee’s open housing bill passed. In 1971, Phillips was appointed as the first woman to the Milwaukee County Judiciary, but lost the subsequent election to a white candidate. She then taught at the University of Wisconsin Milwaukee and became mentor to Black Student Union president and future member of the Common Council, Fred Gordon. In 1978, she became the first woman and first non-white to be elected as Wisconsin’s Secretary of State, making her the highest ranking female Wisconsin official in the 20th century. In 2002, Phillips was appointed “Distinguished Professor of Law” at Marquette University School of Law. She also chaired the successful congressional campaign of Gwen Moore in 2004 at age eighty. In 2006, Phillips founded the Vel Phillips Foundation which supports the work of people who are engaged in projects of social justice and change. She is also active on numerous civic boards in Milwaukee.

See how Vel Phillips is related to other HistoryMakers
Click Here To Explore The Archive Today!