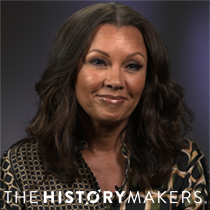 See how Vanessa Williams is related to other HistoryMakers
Donate Now

Actress and singer Vanessa Williams was born on March 18, 1963 to Milton and Helen Williams in Tarrytown, New York. Williams graduated from Horace Greeley High School in Millwood, New York in 1981, and enrolled at Syracuse University in Syracuse, New York.

In 1983, Williams won the Miss Greater Syracuse Pageant and Miss New York Pageant. Later that fall, she was crowned Miss America 1984, becoming the first African American contestant to win the pageant. A scandal involving Williams forced her to resign in July of 1984. Williams then pursued a career in music. In 1988, she released her first album, The Right Stuff, which featured the singles The Right Stuff, He's Got the Look and Dreamin'. The album’s popularity garnered Williams the NAACP Outstanding New Artist Award. Her multi-platinum second album, The Comfort Zone, was nominated for three Grammys in 1992, and her third album, The Sweetest Days, achieved platinum status in 1994. Williams earned another Grammy nomination for her popular rendition of Colors of the Wind, featured on the Pocahontas soundtrack. Williams went on to release five more studio albums: Star Bright (1996), Next (1997), Silver & Gold (2004), Everlasting Love (2005), and The Real Thing (2009), which debuted at #1 on the Billboard Jazz Charts.

Williams has also enjoyed a successful acting career. After making her acting debut on an episode of The Love Boat in 1984, Williams went on to appear in such films as Eraser (1996), Soul Food (1997), Light It Up (1999), Shaft (2000), opposite Samuel L. Jackson, Johnson Family Vacation (2004), Hannah Montana: The Movie (2009), and Tyler Perry’s Temptation: Confessions of a Marriage Counselor (2013). She also portrayed Suzanne de Passe in the Jackson 5 biopic The Jacksons: An American Dream (1992). Williams executive-produced and starred in Lifetime's The Courage to Love and VH1’s original movie A Diva's Christmas Carol, both released in 2000.

Williams earned three-Emmy nominations for her starring role as Wilhelmina Slater on Ugly Betty from 2006 to 2010 and also starred on the last two seasons of Desperate Housewives on ABC, winning two NAACP Image Awards for her portrayal of Renee Perry. She also starred as Maxine Robinson on the television show Daytime Divas in 2017.

In addition to acting on film and in television, Williams starred on Broadway in Kiss of the Spider Woman (1994), Into the Woods (2002; Tony Award nominee as Best Actress in a Musical), Sondheim on Sondheim (2010) and The Trip to Bountiful (2003).

Williams, and her mother Helen Williams, co-authored the New York Times bestseller You Have No Idea: A Famous Daughter, Her No-nonsense Mother, and How They Survived Pageants, Hollywood, Love, Loss (and Each Other), published in 2013. Williams returned to the Miss America Pageant in 2015 as the head judge and special performer – receiving an apology from the organization for the events that took place in 1984.

Vanessa Williams was interviewed by The HistoryMakers on April 30, 2018.

See how Vanessa Williams is related to other HistoryMakers
Donate Now