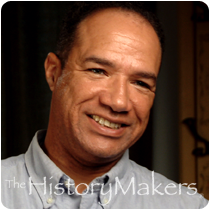 See how Vance Vaucresson is related to other HistoryMakers

Entrepreneur Vance Vaucresson was born on December 3, 1968, in New Orleans, Louisiana, to a long family history of butchers. His great-grandfather, Levinsky Vaucresson, and great-grandmother, Odile Gaillard, originated from the Alsace region of France, but they migrated to New Orleans, where Levinsky worked as a butcher around the turn of the century. Their son, Robert Levinsky Vaucresson, continued in the same line, and Vaucresson’s father, Robert “Sonny” Vaucresson, transformed the family meat market into the Vaucresson Sausage Company. In 1969, the Vaucresson family started selling their sausages at the New Orleans Jazz & Heritage Festival. At the 1976 Festival, New York Times Food Critic Mimi Sheraton named Sonny’s hot sausage po’boy the “Best Food at the Fest.”

When he was eight years old, Vaucresson’s father, Sonny, began to teach him about the family business; Vaucresson learned sausage-making techniques, along with the traditions of New Orleans Creole culture. In 1983, the Vaucresson Sausage Company was officially established. They opened their factory in October on the corner of St. Bernard and North Roman, in the 7th Ward, where they made sausages and gumbo. That same year, The Vaucresson family sold sausage po’boys at the first French Quarter Festival. In 1992, Vaucresson graduated from Morehouse College in Atlanta, Georgia, and returned to New Orleans to work at the family business. For six years he worked alongside his father, but on November 1, 1998, Sonny passed away from a massive heart attack. Vaucresson took over the family business.

In 2005, Hurricane Katrina hit New Orleans. After the disaster, Vaucresson’s sausage plant laid under six feet of water; his equipment was ruined, his supply of meat spoiled, and his insurance didn’t cover flood damage. Vaucresson, his pregnant wife, and his young son traveled to New Iberia, Louisiana, where they shared a three bedroom house with fifteen people while waiting for better housing. Eventually, they moved into a mobile home. Vaucresson’s plant was unworkable, so he asked a man with a functioning plant in Metairie, Louisiana, for help. The man, once his main competitor, agreed, and Vaucresson was able to make his sausage po’ boys for that spring’s Jazz Fest. Vaucresson continues to run the Vaucresson Sausage Company, serving his signature po’boy at both the New Orleans Jazz & Heritage Festival and the French Quarter Festival.

Vance Vaucresson was interviewed by The HistoryMakers on June 10, 2010.

See how Vance Vaucresson is related to other HistoryMakers
Click Here To Explore The Archive Today!