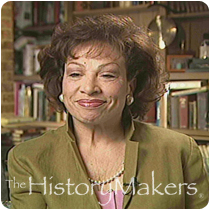 See how Valerie Richardson Jackson is related to other HistoryMakers

Valerie Richardson Jackson, host of Atlanta, Georgia’s, public radio station WABE’s Between the Lines, a series of conversations with some of today’s brightest and most notable writers and thinkers, and former First Lady of Atlanta as wife of the first African American mayor of Atlanta, Maynard Holbrook Jackson, Jr, was born April 3, 1949 in Richmond, Virginia. Raised by parents Cora Ruth Feggins Richardson and Charles Hoover Richardson, Jackson integrated the high school she attended in Richmond and went on to major in business management at Virginia Commonwealth University. Jackson earned her M.B.A. degree from the Wharton School at the University of Pennsylvania; after graduating in 1973, she worked as an advertising executive at Grey Advertising in New York City, and as Regional Marketing Supervisor for TWA’s corporate headquarters in New York.

Jackson met Maynard Jackson at a party hosted by Roberta Flack in 1976. In 1977, during Maynard Jackson’s second of three terms as Mayor of Atlanta, the couple was married; they had two children, Valerie-Amanda and Alexandra. During her twelve years as First Lady of Atlanta, Jackson served as Special Advisor to the Mayor’s Office of Economic Development, helping to bring the 1988 Democratic National Convention and the 1996 Olympic Games to Atlanta. Maynard Jackson’s last term in office ended in 1993, but both Jacksons remained active in civic life as Maynard Jackson was considering a bid for the U.S. Senate in 2002. Jackson husband died at age 65 of a heart attack on June 23, 2003, while on a business trip to Washington, D.C.

As host of Between the Lines, Valerie Richardson Jackson interviewed such notable individuals as Hillary Clinton, Sidney Poitier, former President Jimmy Carter, Cornell West, Ayanla Vanzant, and Deepak Chopra. Jackson served as chair of Jackmont Hospitality, Inc., and as president of Jackson Securities, Inc. In addition to her executive and radio activities, Jackson worked with civic boards and organizations as a motivational speaker, and volunteered on numerous civic boards and organizations, including the Maynard Jackson Youth Foundation; Habitat for Humanity; Leadership Atlanta; the Northwest Georgia Girl Scout Council; and the Alliance for a New Humanity.

See how Valerie Richardson Jackson is related to other HistoryMakers
Click Here To Explore The Archive Today!