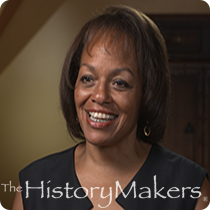 See how Valerie Mosley is related to other HistoryMakers

Financial executive Valerie Mosley was born on February 5, 1960 in Tuskegee, Alabama to Clara Mosley and Clarence Mosley. Mosley earned her B.A. degree in history from Duke University in Durham, North Carolina in 1983. She received her M.B.A. degree in finance from the University of Pennsylvania’s Wharton School of Finance in Philadelphia, Pennsylvania in 1986.

Mosley worked as a commercial lending officer at Chase Manhattan Bank until she enrolled at the University of Pennsylvania in Philadelphia, Pennsylvania in 1984. Upon her graduation from the University of Pennsylvania, Mosley worked in institutional bond sales at Kidder, Peabody, and Company until 1990. She then joined P.G. Corbin Asset Management, Inc. as a chief investment officer and portfolio manager. In 1992, Mosley left the firm to join Wellington Management Group, where she worked as a portfolio manager, investment strategist, and senior vice president during her twenty-year career with the company. As a fixed income portfolio manager, she oversaw a $9 billion portfolio and joined the company’s Core Bond Strategy Group and Industry Strategy Group, which handled $20 billion in fixed income portfolios for corporate and public pension funds, endowments, and mutual funds. In 2005, Mosley was appointed partner at Wellington Management Company, LLP. After leaving the company in 2012, Mosley founded Valmo Ventures, Inc., which specialized in trend identification, global wealth management, and corporate advisory. Mosley also founded Heart Beings, a blog devoted to positive articles, informative interviews, and financial advice.

Mosley served on President Barack Obama’s Board of Advisors on Historically Black Colleges and Universities. Mosley also served on the Federal Reserve Bank of Boston’s Advisory Board for Diversity, as president of the Wharton Alumni Club of Atlanta, and as director of The Eaton Vance Fund. Mosley was also named as one of the “50 Most Powerful Women in Business” in 2006, as one of the “Top 75 Blacks on Wall Street” by Black Enterprise in 2011, and one of the “Top 50 African Americans on Wall Street” by Black Enterprise magazine.

Valerie Mosley was interviewed by The HistoryMakers on August 19, 2017.

See how Valerie Mosley is related to other HistoryMakers