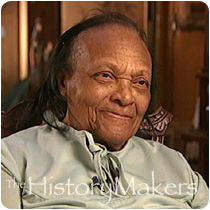 Valarie Justiss Vance was born in Mt. Pleasant, Texas in 1913, but at a young age moved with her family to Toledo, Ohio. After graduating from Waite High School in 1931, she moved to Washington, D.C., where she attended Howard University, earning her A.B. in 1935. Returning to Toledo after her graduation, Vance earned an M.A. in 1936 from the University of Toledo. She later attended the University of Chicago, and went on to earn the Ph.D. from the Ohio State University in 1949. For her doctoral dissertation, Vance focused on the unmarried father, and she was the first person in America to write extensively on the subject. She also spent time studying at the University of Vienna in Austria where she studied the German language.

After earning her M.A., Vance relocated to Jackson, Tennessee, where she was hired as a professor of English at Lane College. In 1938, she moved to Chicago to take a position with the Chicago Welfare Administration as the senior social worker. Vance spent the years between 1940 and 1960 working with the Public Schools of the District of Columbia as a research assistant in social work. Also during the 1940s, Vance was a broadcaster on the program Americans All in Washington, D.C. Vance became the director of social work at the Massachusetts Association for the Adult Blind in 1960, where she remained until being hired by the City of Los Angeles in 1963. While working for the City of Los Angeles, Vance wrote the social work provisions that were included in the War on Poverty. During that time, Vance was also served as a mentor at Loma Linda University. In 1970, Vance became an assistant professor at the University of California, and in 1973 she became a psychological consultant for the Head Start program. At that same time, she went to work for the California Department of Mental Health as a psychiatric social worker. Vance left the Department of Mental Health in 1984, and in 1999 she retired from Head Start.

In addition to her extensive working career, Vance spent large amounts of time active with various organizations across the country. For more than thirty years, she was a consultant and grant writer for the Council of Affiliated Negro Organizations (CANO). She also served on the board of directors of Loma Linda University, and remained involved with the school by serving on the advisory committee to the board of directors for social work. She was featured in Who’s Who in American Universities and Colleges, the University of Toledo Alumnus and The World’s Who’s Who of Women.

See how Valarie Justiss Vance is related to other HistoryMakers
Donate Now
Click Here To Explore The Archive Today!