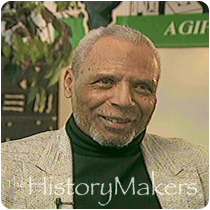 Useni Eugene Perkins is a distinguished poet, playwright and youth worker. Born in Chicago on September 13, 1932, he was the son of Marion Perkins, a sculptor, and Eva Perkins. Being exposed to the arts at a young age through his father would prove to be a major influence on his later years.

He attended Chicago's Wendell Phillips High School, where he developed an early interest in writing. Graduating in January 1950, he stayed in the city for his college education, earning a B.S. in group work from George Williams College in 1963. After graduation, he worked as the program director for the Henry Horner Chicago Boys Club. It was during this time that he also pursued an M.S. in administration, which he received in 1966.

In that year, Perkins became the executive director of the Better Boys Foundation of Chicago, a social agency involved in community, social, educational and cultural development. Raised in the housing projects of Chicago, and having established a career as a sociologist dealing with troubled youth, he authored the 1976 book Home Is A Dirty Street: The Social Oppression of Black Children.

Upon leaving his post with the Better Boys Foundation in 1982, Perkins became an executive consultant in Chicago with INESU Consultants, where he stayed for two years. He was still very active in writing, penning several sociological books on African American youth, as well as publishing books of poetry and authoring various plays that were produced in theaters in Chicago.

In 1986, he became the social director for the Chicago Urban League, and two years later became the chief executive officer of the Urban League of Portland, Oregon. Returning to Chicago in 1990 as the interim president of the DuSable Museum of African American History, Perkins founded the Association for the Positive Development of African American Youth in 1991, which he served as president, and became the project director of the Family Life Center at Chicago State University. He still holds these positions at the latter two organizations. February 25, 1999, was proclaimed Useni Eugene Perkins Day in Chicago. He is a married father of three, and lives in Chicago.

See how Useni Eugene Perkins is related to other HistoryMakers
Donate Now
Click Here To Explore The Archive Today!