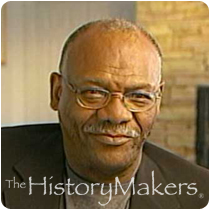 See how Ulysses Ford is related to other HistoryMakers
Donate Now

Ulysses Grant Ford, III was born September 28, 1943 in Charlotte, North Carolina to Roberta and Ulysses Ford, II. Ford graduated from West Charlotte High School in 1961. Moving to Talladega, Alabama to attend Talladega College, Ford pursued his interest in mathematics and received a B.A. in 1965. That year, he married Beverly Odom Ford, who now owns the consulting firm ASM & Associates. They have three sons.

From 1965 until 1968, Ford worked as a math teacher and basketball coach at Charlotte Catholic High School. In 1968, Ford became an accountant and worked for Allstate Insurance and Equitable Life Insurance. In 1972, he began his career in civil service as an administrative assistant for the public works department of the City of Charlotte. In 1978, Ford left Charlotte to become the Director of Solid Waste Management for the City of Ann Arbor, Michigan. Ford went on to hold the title of Director of City Services for seven years in Fort Worth, Texas. Then he moved to Houston and served as Director of Public Works until 1992.

At this point in his career, Ford moved from government service to business and became responsible for marketing as the Vice President of Waste Management, Inc., a post he held for six years. In 1998, Ford founded SDC Consulting, Inc. in Macon, Georgia. SDC represents private companies, helping them increase their access to local governments across the country and thus combines the two main areas of his life's work.

Ulysses Ford, III has been a member of 100 Black Men of America since 1998 and served as president of the Municipal Waste Management Association of the U.S. Conference of Mayors.

See how Ulysses Ford is related to other HistoryMakers
Donate Now
Click Here To Explore The Archive Today!