Information about U. Lawrence Boze 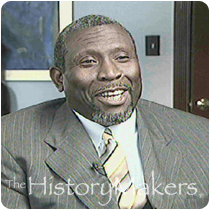 See how U. Lawrence Boze is related to other HistoryMakers
Donate Now

Houston attorney U. Lawrence Bozé, was born November 1, 1949, in Houston, Texas; his mother Iva Stewart Bozé's family operated Stewart’s Grocery, and his father, U.L. Bozé, founded Riverside Bank, Houston’s first African American controlled bank. Bozé graduated from Phyllis Wheatley High School in 1967. From there, Bozé went on to attend the University of Houston on a football scholarship, where he earned his B.S. degree in 1973. In 1978, Bozé became the first student to receive a master’s in finance degree and a J.D. degree from Texas Southern University in their joint degree program; he graduated Summa Cum Laude and was valedictorian of both programs.

Bozé served as the bankruptcy counsel for Chevron U.S.A./Gulf Oil Corporation from 1978 to 1987. As vice president/bankruptcy counsel for Allied Bankshares, Inc., Bozé formulated the bankruptcy section of Allied Banks of Texas, which consisted of fifty-two banks and handled a docket of over 700 pre-bankruptcy cases. Later, Bozé founded U. Lawrence Bozé and Associates, which specialized in environmental law, real estate, and commerce litigation. In addition, Bozé served as a closing attorney and tort litigator for the U.S. Department of Housing and Urban Development, and is an AMI certified mediator. In 1994, Bozé became the first black fee attorney for Fidelity National Title.

Active in the National Bar Association (NBA) since 1987, Bozé served as the president of the affiliate, Houston Lawyers Association, in 1987. In 1991, Bozé founded and became the first president of the Texas Association of African American Lawyers. Bozé was elected the NBA’s 54th president in 1996; he served as a State Bar Examiner for the Texas Board of Law Examiners from 1997 on. Bozé is a recipient of the NAACP Distinguished Service to the Houston Community Award.

U. Lawrence Boze was interviewed by The HistoryMakers on November, 3, 2004.

See how U. Lawrence Boze is related to other HistoryMakers
Donate Now
Click Here To Explore The Archive Today!