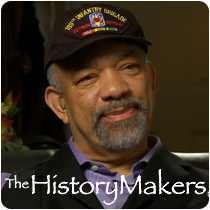 See how Tyrone T. Dancy is related to other HistoryMakers

U.S. Army soldier Tyrone T. Dancy was born in Philadelphia, Pennsylvania. Dancy was drafted into the U.S. Army in 1969 and went on to serve in the Vietnam War with the 199th light infantry brigade. Following a brief tour of duty, Dancy returned to the United States and continued his education. He graduated from Pierce Junior College with his A.A. degree in arts and humanities and then enrolled at LaSalle University where he received his B.A. degree in sociology and psychology in 2005, and his M.A. degree in communications in 2007.

In April of 1977, Dancy began his career with the State Labor Department of Pennsylvania as a disabled veteran’s outreach program specialist. Throughout his twenty-five year career, he has provided employment assistance and guidance to thousands of veterans. In 1990, Dancy worked as a local veteran’s employment representative. He then served as a veteran’s program function supervisor for twelve years before retiring on November 22, 2002. Dancy also served for a short time as the chairperson of the Pennsylvania International Association of Personnel in Employment Security (IAPES) Veterans Committee as well as the vice chairperson of the IAPES National Veterans Committee.

Throughout the early 1990s, Dancy wrote a bi-weekly column entitled, “On Point” for the Philadelphia Leader. This led him to write and self-publish the book, Serving Under Adverse Conditions, which discloses the struggles of Vietnam veterans. Dancy went on to co-produce, “Letters from the Attic,” a play about African American war veterans. Dancy also serves as host and producer of the Veterans Hour Radio Program on WDAS-AM 1480 in Philadelphia.

Dancy has been honored by numerous civic organizations for his work on behalf of veterans. He received the Dean K. Phillips Award from the National Veterans Training Institute as well as an award from the National Office of Vietnam Veterans of America for his leadership in the passage of legislation for a Veterans Bill of Rights in the State of Pennsylvania. Dancy was presented with a Senatorial Citation in 1994 from Senator Allyson Y. Schwartz of Pennsylvania for his leadership on veterans issues. Dancy’s military honors include the Bronze Star for Heroism with the “V” for Valor, the Purple Heart for wounds sustained in combat, the Vietnam Campaign Medal, the Army Commendation, the Meritorious Service Medal, the Army Good Conduct Medal, the National Defense Medal, the Vietnam Service Medal, and the Combat Infantry Badge.

See how Tyrone T. Dancy is related to other HistoryMakers
Click Here To Explore The Archive Today!