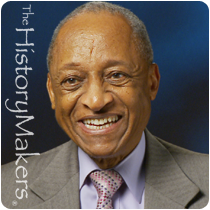 Favorite Color:
Blue
Favorite Food:
Gumbo (New Orleans)
Favorite Time of Year:
Fall
Favorite Vacation Spot:
New Orleans, Louisiana
Favorite Quote:
There are a lot of things I don't do, but nothing I won't do.

Favorite Color:
Blue
Favorite Food:
Gumbo (New Orleans)
Favorite Time of Year:
Fall
Favorite Vacation Spot:
New Orleans, Louisiana
Favorite Quote:
There are a lot of things I don't do, but nothing I won't do.

See how Tyrone Mitchell is related to other HistoryMakers

Chemist and federal government administrator Tyrone D. Mitchell was born on May 6, 1939 in New Orleans, Louisiana. Mitchell was taught by an excellent chemistry teacher at L.B. Landry High School who reinforced his interest in science. He received his B.A. degree in chemistry from Dillard University in New Orleans and earned his M.S. degree in organic chemistry from the University of Pittsburgh in 1964. Mitchell then joined General Electric Company (GE) as a process chemist. In 1971, he became an associate staff chemist at General Electric R & D Center. Mitchell received his Ph.D. degree in polymer chemistry from Rensselaer Polytechnic Institute in Troy, New York.

After completing his education, Mitchell joined General Electric Silicones as a senior chemist. In 1990, after twenty-five years, he left GE, with the company, having co-authored sixteen technical publications. During his time there, he received more than twenty-five United States patents in the areas of organosilicon chemistry, polymer chemistry and the synthesis of adhesion promoters for use in silicone sealants. The products he helped to develop produced over $100 million in annual sales in 1990. He joined Corning Incorporated where he worked in developing new coatings for optical fibers. Mitchell held a number of management positions in the Science & Technology Division at Corning, where he sought out new technology to improve Corning’s research and development projects. In 2000, he retired from Corning to serve as a program officer in the Organic and Macromolecular Chemistry Program at the National Science Foundation (NSF). In 2003, he was promoted to program director of the Organic and Macromolecular Chemistry Program.

Mitchell has served on the Board of Directors of the National Organization for the Professional Advancement of Black Chemists and Chemical Engineers, the Center for Advanced Materials Processing at Clarkson University and the Technology Transfer Society. He was a member of the Chemistry Section Committee of the American Association for the Advancement of Science (AAAS) and a member-at-large to the Industrial Science & Technology Section of AAAS. In 2006, he was inducted as an AAAS fellow. Mitchell is married to Sandra Parker Mitchell and they have three children: Tracey, Tyrone, Jr. and Todd.

Tyrone D. Mitchell was interviewed by The HistoryMakers on June 27, 2012.

See how Tyrone Mitchell is related to other HistoryMakers
Click Here To Explore The Archive Today!