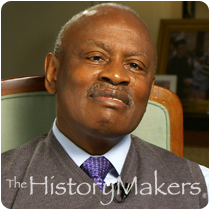 See how Tyrone Brown is related to other HistoryMakers
Donate Now

Communications attorney and broadcasting executive Tyrone Brown was born in Norfolk, Virginia on November 5, 1942. He graduated from East Orange High School in New Jersey in 1960. Brown received his A.B. degree from Hamilton College in Clinton, New York in 1964. He went on to earn his L.L.B. degree from Cornell University Law School in Ithaca, New York in 1967. During that year, Brown also served as a law clerk to former U.S. Supreme Court Justice Earl Warren.

From 1968 to 1970, Brown worked as an associate with the Washington D.C. law firm of Covington & Burling. He was also a special investigator for the President's Commission on Campus Unrest in 1970. From 1970 to 1971, he served as assistant to Senator Edmund S. Muskie, then as staff director of the Intergovernmental Relations Subcommittee of the Senate Government Operations Committee. Brown then served as director and vice president for legal affairs of Post-Newsweek Stations, Inc. In 1977, President Jimmy Carter appointed Brown to the Federal Communications Commission (FCC) to succeed Benjamin Hooks, the second African American appointed to the United States government regulatory agency. Brown worked as a commissioner with the FCC for three years before stepping down in 1981. He returned to private practice law when he worked for the firms Steptoe & Johnson and Wiley Rein, LLP. After teaching journalism classes at Duke University, Brown headed the Media Access Project, a non-profit, public interest law firm and advocacy organization working in communications policy. In 2009, Brown became the founding member and vice chairman of the board for IRIDIUM Satellite LLC. Brown has also served as principal outside counsel for Black Entertainment Television (BET).

Brown is former chair of the Washington Lawyers Committee for Civil Rights Under Law, and a director of the Minority Media and Telecommunications Council. He has been featured in Ebony, Jet and Black Enterprise magazines.

Tyrone Brown was interviewed by The HistoryMakers on March 5, 2012.

See how Tyrone Brown is related to other HistoryMakers
Donate Now
Click Here To Explore The Archive Today!