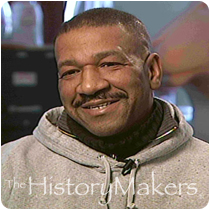 See how Tyree Guyton is related to other HistoryMakers

Public artist and Heidelberg Project founder Tyree Guyton was born on August 24, 1955 in Detroit, Michigan to George Guyton and Betty Solomon Guyton. He grew up on Heidelberg Street and Ellery on Detroit’s East Side near legendary “Paradise Valley.” Guyton attended Ralph J. Bunche Elementary School, Miller Junior High School and Northern High School, but the accidental fatal shooting of his cousin caused him to drop out of Martin Luther King, Jr. High School in 1972 to join the United States Army.

Guyton was released from the U.S. Army in 1973. He returned to Detroit, working at Chrysler’s Jefferson Assembly Plant and the Ford Motor Company. In 1980, Guyton began art classes at Detroit’s College for Creative Studies and at Marygrove College, where as a painter and sculptor he was mentored by Charles McGhee. McGhee introduced Guyton to the works of Romare Bearden, Jacob Lawrence, and Robert Blackwell. He was also greatly influenced by Al Loving, artist in residence at Eastern Michigan University. During this period, Guyton joined the Detroit Fire Department, serving there through 1984. In 1986, shocked by urban violence, he responded by painting found objects, throwing the objects into the trees and nailing stuffed animals and dolls to abandoned houses as memorials. Guyton’s signature style featured bright clashing polka dots. He has been featured on NBC Nightly News, Nightline and the Oprah Winfrey Show. Through his art, Guyton succeeded in bringing the world’s attention to the East Side of Detroit, largely abandoned after the 1967 riots.

Since 1988, Guyton has been a teacher or artist in residence at Marygrove College, City of Detroit, Syracuse University School of Fine Art, Cranbrook Museum, Detroit Institute for the Arts (DIA), Harvard University, University of Michigan, St. Olaf College, Ohio State University, New School for Social Research, Intuit Art Center, Central Michigan University and Brazil’s Universidade Federal Da Bahia. Guyton’s work became a part of the curriculum at Wayne State University under an honors course called Art Community and Social Action: The Heidelberg Project, under which, Guyton helped to develop. He has received the David A. Hammond Memorial Scholarship, the Spirit of Detroit Award and the Humanity in the Arts Award. Guyton’s work can be found at the Studio Museum of Harlem, Kresge Art Museum, Detroit Institute of Art, the Delaware Art Institute and the University of Michigan Museum of Art.

Guyton was interviewed by The HistoryMakers on March 8, 2007.

See how Tyree Guyton is related to other HistoryMakers
Click Here To Explore The Archive Today!