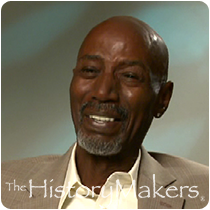 See how T.S. Monk, III is related to other HistoryMakers
Donate Now

Monk’s first public performance as a drummer was with his father on a television show in 1970. He toured with his father's band from 1970 to 1975, and then played with the fusion band Natural Essence. He later formed the R&B group "T.S. Monk" with his sister Barbara Monk and vocalist Yvonne Fletcher. The group recorded three albums for Mirage Records in the early 1980s and charted a top 20 hit with its single "Bon Bon Vie (Gimme the Good Life)," followed by "Too Much Too Soon."

In 1986, Monk co-founded and chaired the Thelonious Monk Institute of Jazz in memory of his father, who passed away in 1982. Monk returned to performing jazz in 1992, after an absence of several years, forming the T.S. Monk Sextet. That same year, he released Take One on Blue Note Records, which was followed by Changing of the Guard in 1993 and the critically acclaimed The Charm in 1995. He celebrated his father's eightieth birthday with the album Monk on Monk in 1997. He then released three more records: Crosstalk in 1999, Higher Ground in 2003, and 2014’s Verbiest Meets Monk: Father and Son, a collaboration with Belgian jazz accordionist, Rony Verbiest. Monk’s sextet has performed at the White House, various festivals and concert halls, legendary jazz clubs and landmark institutions in the United States, Europe, Asia and the Middle East.

Monk received the New York Jazz Awards First Annual "Recording of the Year" award and Downbeat magazine’s prestigious 63rd annual Album of the Year Reader's Choice Award for Monk on Monk. In addition, his Thelonious Monk Institute of Jazz sponsored ABC’s “A Celebration Of America's Music” in 1996 and 1998, held its International Jazz Competition since 1987, and offered its full scholarship Thelonious Monk Institute of Jazz Performance graduate-level college program since 1995. Monk also collaborated with Herbie Hancock and UNESCO in 2012 in creating “International Jazz Day,” a gathering of jazz musicians from 196 countries.

T.S. Monk was interviewed by The HistoryMakers on September 9, 2014.

See how T.S. Monk, III is related to other HistoryMakers
Donate Now