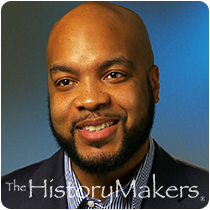 See how Trymaine Lee is related to other HistoryMakers

Journalist Trymaine Lee was born on September 20, 1978. He was raised in Chesilhurst, New Jersey, and graduated from Milton S. Hershey School in Hershey, Pennsylvania. Lee briefly attended Shippensburg University in Pennsylvania before transferring to Camden County College in Blackwood, New Jersey, where he received his A.A. degree in communications in 2000. Lee went on to attend Rowan University, where he was a staff writer for the school’s newspaper, The Whit. In 2003, he graduated from Rowan University with his B.A. degree in journalism/communications.

Upon graduation, Lee was hired as an intern for the Philadelphia Daily News. He went on to work as a police and crime reporter at the Philadelphia Tribune and Trenton, New Jersey’s The Trentonian. In 2005, Lee was hired as a reporter for The Times-Picayune in New Orleans, Louisiana, where he covered Hurricane Katrina and was awarded the 2006 Pulitzer Prize for breaking news reporting for his coverage of the storm’s aftermath. From 2006 to 2010, Lee served as a staff reporter at The New York Times, where he covered the Harlem beat for the paper’s metro desk and contributed to The New York Times’ Pulitzer Prize-winning coverage of the Eliot Spitzer prostitution scandal. From 2011 to 2012, Lee worked as a senior reporter for The Huffington Post and was one of the first national reporters to cover the Trayvon Martin shooting in 2012. That same year, he was hired as a national reporter for MSNBC, where he reports on social justice issues and the impact of politics and policy on everyday people.

In addition to winning a Pulitzer Prize, Lee was named the National Association of Black Journalists’ 2006 Emerging Journalist of the Year. He also received Rowan University’s Alumnus of Distinction Award in 2006 and Camden County College’s Outstanding Alumni Award in 2010. In 2011, the New York chapter of the NABJ honored Lee with the Griot Award for Overall Excellence, and, in 2012, he received the April Sidney Award from the Sidney Hillman Foundation.

Trymaine Lee was interviewed by The HistoryMakers on February 20, 2014.

See how Trymaine Lee is related to other HistoryMakers
Click Here To Explore The Archive Today!