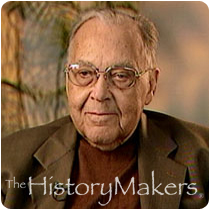 See how Truman K. Gibson, Jr. is related to other HistoryMakers
Donate Now

Lawyer, boxing promoter and entrepreneur Truman K. Gibson, Jr. was born on January 22, 1912 in Atlanta, Georgia. In an effort to flee the race-related violence of the South, the Gibson family relocated to Columbus, Ohio in the early 1920s. Truman Gibson, Jr. attended Columbus' predominantly white East High School. He went on to study political science at the University of Chicago where he roomed with Benjamin O. Davis, the first Black general in the Air Force. After graduating in 1932, Gibson remained at the University of Chicago to pursue a law degree, which he received in 1935.

From 1935 to 1940, Gibson practiced law in Chicago. In 1940, he became the assistant to William H. Hastie, aide to U.S. Secretary of War Henry Stimson. In 1943, Gibson became aide to Henry Stimson. Gibson was then appointed to President Harry S. Truman's Advisory Committee on Universal Military Training in 1946. The committee's findings greatly influenced President Truman's landmark decision to desegregate the military. In 1947, Gibson became the first African American to be honored with the Medal of Merit Award for Civilians.

After helping Joe Louis with tax problems in 1949, Gibson took on the role of director and secretary of Joe Louis Enterprises and entered the word of professional boxing as a manager and promoter. He was the first black boxing promoter and Secretary of the International Boxing Club. In 1959, Gibson became one of the three original directors of the Chicago-based National Boxing Enterprises, the company that brought the legendary Friday night fights to television.

By the early 1960's Gibson abandoned boxing and went into private practice. Since then, he has faced numerous legal battles of his own. These entanglements have not prevented Gibson from remaining an active and respected member of the Chicago legal and business communities. Over the years, he has worked with the School for Automotive Trades in Chicago, and acted as Secretary of the Chicago Land Clearance Commission. He served on the boards of directors of the Chicago Community Fund and Roosevelt University and has been a member of the Cook County Bar Association. His friends and associates have included Thurgood Marshall, Duke Ellington, Langston Hughes and Richard Wright. Gibson continues to reside in Chicago and practice law. He is the sole survivor of President Truman's "Black Cabinet."

See how Truman K. Gibson, Jr. is related to other HistoryMakers
Donate Now
Click Here To Explore The Archive Today!