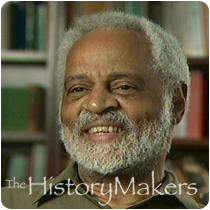 Sociology professor and author Troy Duster was born on July 11, 1936, in Chicago, Illinois. The son of Alfreda Duster, a community organizer, he was raised on the south side of Chicago. His extraordinary grandmother, Ida B. Wells, was born a slave in 1862 in Mississippi, months before the signing of the Emancipation Proclamation. She became an editor and co-owner of The Free Speech and Headlight, a local African American newspaper in Memphis, Tennessee, and was among the first generation of writers to invent investigative journalism. She continued her tireless crusade for equal rights for African Americans until her death in 1931. Duster’s father died when he was nine, leaving behind his mother, sister, and two older brothers. Becoming editor of his high school newspaper and graduating first in his class, Duster attended Northwestern University where he studied journalism and sociology. Earning his B.S. degree in journalism in 1957, he continued his studies at the University of California, Los Angeles, where he earned his M.A. degree in sociology in 1959. In 1962, he was awarded his PhD in sociology from Northwestern University.

In 1999, Duster became professor of sociology and director of the Institute for the History of the Production of Knowledge at New York University. He is also the Chancellor’s Professor of Sociology at the University of California, Berkeley, where he has taught since 1970. In 2004, he served a one-year term as president of the American Sociological Association. Duster’s research and writing have ranged across a variety of subject areas: the sociology of law, science, deviance, inequality, race and education. In 1970, his first book, The Legislation of Morality: Drugs, Crime, and Law became a classic in the drug field.

Duster is co-author of Whitewashing Race: The Myth of a Color-Blind Society (2003), which won the Benjamin Hooks Award and was a finalist for the C. Wright Mills Award in 2004. Among his other awards are a Guggenheim Fellowship at the London School of Economics; an honorary Doctor of Letters from Williams College; and the Dubois-Johnson-Frazier Award from the American Sociological Association. With his siblings, Duster established the Ida B. Wells Foundation, which gives awards to journalists and researchers working in Wells’ tradition of writing and speaking out for civil rights, civil liberties and social justice.

Duster lives in New York with his family.