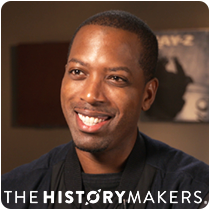 Favorite Color:
Blue
Favorite Food:
Oxtail
Favorite Time of Year:
Autumn
Favorite Vacation Spot:
Jamaica
Favorite Quote:
The Trials You Go Through And The Blessings You Receive Are The Same.$

Favorite Color:
Blue
Favorite Food:
Oxtail
Favorite Time of Year:
Autumn
Favorite Vacation Spot:
Jamaica
Favorite Quote:
The Trials You Go Through And The Blessings You Receive Are The Same.$

See how Tristan Walker is related to other HistoryMakers
Donate Now

Entrepreneur Tristan Walker was born on July 5, 1984 in Queens, New York to Bettie Walker Harris and Roger Vassar. Walker attended Cadwallader Colden School and J.H.S. 185, Edward Bleeker School in Queens. Walker then received a full scholarship to attend the Hotchkiss School in Lakeville, Connecticut. Upon graduating in 2002, Walker went on to obtain his B.A. degree in economics from Stony Brook University in Stony Brook, New York in 2005. He then earned his M.B.A. degree from the Stanford Graduate School of Business in Stanford, California in 2010.

Walker started his internship at Lehman Brothers, Inc. in New York City in 2005, where he eventually accepted a full-time position as an analyst and trader and served until 2007. Walker was then hired to work for JPMorgan Chase and Co. as an analyst and trader, and served in that position until 2008. During graduate school, Walker also held internships at the Boston Consulting Group and Twitter, Inc. In 2009, Walker accepted the director of business development position at the startup company, Foursquare Labs, Inc. In 2012, Walker founded the non-profit organization CODE2040, to promote diversity in the technology industry. After leaving Foursquare Labs, Inc. in 2012, Walker worked as an entrepreneur-in-residence at the venture capital firm of Andreessen Horowitz, located in Menlo Park, California. In 2013, Walker founded and served as CEO of Walker and Company Brands, Inc., an African American health and beauty products company. Walker and Company Brands, Inc.’s products included the Bevel shaving line for black men, and FORM Beauty, a women’s hair care collection designed for all hair textures launched in 2017.

Walker was named the USA Today Person of the Year in 2014. In the same year, Walker also was featured on Creativity 50 list The Most Creative People of the Year. In 2017, Walker was later featured on Fortune Magazine’s ’40 under 40’ list, Ebony magazine’s ‘100 Most Powerful People’ list and the Hollywood Reporter’s ‘Digital Power 50’ list.

Tristan Walker and his wife, Amoy Toyloy Walker, have one son, Avery Walker.

Tristan Walker was interviewed by The HistoryMakers on November 29, 2017.

See how Tristan Walker is related to other HistoryMakers
Donate Now
Click Here To Explore The Archive Today!