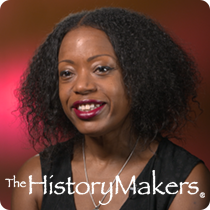 Favorite Color:
Deep Pink
Favorite Food:
Nuts, Popcorn, Kale
Favorite Time of Year:
Spring
Favorite Vacation Spot:
Caribbean
Favorite Quote:
I Have All The Time I Need To Do All I Need To Do.

Favorite Color:
Deep Pink
Favorite Food:
Nuts, Popcorn, Kale
Favorite Time of Year:
Spring
Favorite Vacation Spot:
Caribbean
Favorite Quote:
I Have All The Time I Need To Do All I Need To Do.

See how Tracy Reese is related to other HistoryMakers

Fashion designer Tracy Reese was born on February 12, 1964 in Detroit, Michigan. As a child, Reese’s mother, a modern dance teacher, taught her how to sew and make clothes. Reese graduated from Cass Technical High School in Detroit in 1980, and moved to New York City to enroll in an accelerated program at the Parsons School of Design, which she completed in 1984.

After graduating from the Parsons School, Reese worked for French fashion designer Martine Sitbon at the firm of Arlequin. Reese went on to work at a number of top fashion houses, eventually becoming head of the women’s portfolio for 1980s fashion icon Perry Ellis. In 1996, Reese launched her own ready-to-wear label, Tracy Reese, which was noted for its femininity and retro-influenced styles. Reese opened a storefront in New York City to exclusively sell her product line. In 2000, Reese expanded her brand with the creation of her mass market line, Tracy Reese Plenty, and her home furnishings line, Plenty, which was followed in 2006 by the dress-focused line Frock! That same year, Reese opened the flagship Tracy Reese store in New York City. In 2009, Reese launched her luxury line Tracy Reese Black Label, and, two years later, opened the second Tracy Reese store in Tokyo, Japan. In 2012, First Lady Michelle Obama, a longtime fan of Tracy Reese designs, wore a dress custom-made by Reese during her speech at the 2012 Democratic National Convention. Reese also designed clothing for singer Beyonce Knowles and actress Sarah Jessica Parker. For Fall 2016, Reese created a short film called ‘A Detroit Love Song,’ which she presented at Fashion Week off-runway. Also that year, Reese announced that her designs would be available in an expanded range of sizes, making them more inclusive of all American women.

Tracy Reese was interviewed by The HistoryMakers on December 2, 2016.

See how Tracy Reese is related to other HistoryMakers
Click Here To Explore The Archive Today!