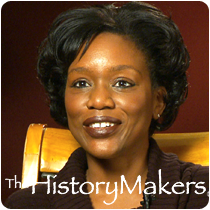 See how Trachette Jackson is related to other HistoryMakers

Mathematician and professor of mathematics Trachette Jackson was born on July 24, 1972. She attended a large public high school and spent her summers at a math-science honors program hosted by Arizona State University where she developed her passion for mathematics. Jackson was an excellent student and graduated in the top twenty of her class. In 1994, she received her B.S. degree in mathematics from Arizona State University. Jackson earned her M.S. and Ph.D. degrees from the University of Washington in 1996 and 1998, respectively. Her Ph.D. thesis was entitled “Mathematical Models in Two-Step Cancer Chemotherapy.” She completed postdoctoral positions with the Institute for Mathematics and its Applications at the University of Minnesota, and at Duke University.

In 2000, Jackson joined the faculty at the University of Michigan as an assistant professor in the mathematics department. She was promoted to associate professor in 2003. In 2006, Jackson was appointed as the co-principal investigator of the National Science Foundation (NSF)-funded University of Michigan SUBMERGE (Supplying Undergraduate Biology and Mathematics Education Research Group Experiences) program. SUBMERGE is an interdisciplinary program in math and biology that exposes undergraduates to experimental biology within mathematical modeling and gives exposure to quantitative analysis in biology courses. In 2008, she became a full professor in Michigan’s mathematics department. Jackson is the co-founder, and is the co-director, of the the Mathematics Biology Research Group (MBRG). The group organizes lectures, conferences, and workshops for graduate students and postdoctoral researchers, among other activities. The main focus of her research in mathematical oncology is combining mathematical modeling and in vivo tumor vascularization to gain deeper understanding of tumor growth and the vascular structure of molecular, cellular and tissue levels.

Jackson has published numerous papers on the subject of mathematical oncology and her work has received international attention. In 2008, Jackson served as senior editor for the academic journal, Cancer Research, and has reviewed articles for the Journal of Mathematical Biology and the National Academy of Sciences. Jackson has received many awards including the Blackwell Tapia Award (2010) and the Arizona State University's Medallion of Merit Award. Trachette Jackson is married to Patrick Nelson and they have two sons, Joshua and Noah.

Trachette Jackson was interviewed by The HistoryMakers on 10/22/2012.

See how Trachette Jackson is related to other HistoryMakers
Click Here To Explore The Archive Today!