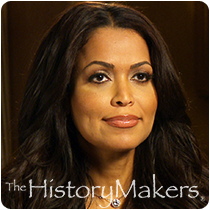 Film producer and talent manager Tracey E. Edmonds was born on February 18, 1967 in Los Angeles, California to Jacqueline and George McQuarn. Edmonds graduated from Stanford University with her B.A. degree in psychobiology in 1987.

Upon graduation, Edmonds ran a successful mortgage and real estate business. Then, in 1993, she created Edmonds Entertainment Group, Inc., a multi-million dollar enterprise actively involved in all aspects of the entertainment business. Edmonds Entertainment produced the film Soul Food in 1997, which earned five NAACP Image Awards. The success of Edmonds Entertainment set the stage for the independent film production company, e2 Filmworks. Edmonds produced two independent films under this banner: Hav Plenty, which was released in 1998; and 2001’s Punks. In 2004, she executive produced the reality show College Hill, the first African American reality program on BET, which set a network record as BET's highest rated series premiere. Edmonds also produced the series Lil' Kim: Countdown to Lockdown, as well as DMX: Soul of a Man, which both aired on BET in 2006. She has produced a number of other films and television shows, including Light It Up, Soul Food: The Series, Josie and the Pussycats, Maniac Magee, Keyshia Cole: The Way It Is, Good Luck Chuck, Who’s Your Caddy? , New in Town, and Jumping the Broom, which won two NAACP Image Awards.

In 2006, Edmonds was hired as chief operating officer and president of Our Stories Films, where she oversees the development and production of projects for urban audiences. In 2013, she launched ALRIGHT TV, an inspirational, faith-friendly YouTube Premium channel, for which she serves as president and chief executive officer.

Edmonds has served on the boards of the American Film Institute, People for the American Way, Children Uniting Nations, and the Producers Guild of America. She also served as a Global Ambassador for CARE, a leading humanitarian organization that works to fight global poverty. Edmonds has won numerous awards, including Turner Broadcasting System’s Tower of Power Award in 2000; Ebony magazine’s Outstanding Women In Marketing & Communications Entrepreneur Award in 2002; the Girls, Inc. Award in 2004; the National Organization for Women’s Excellence in Media Award in 2005; and The Caucus for Television Producers, Writers and Directors Diversity Award in 2006. She has also received an Honorary Doctorate degree in business from Southern University.

Edmonds resides in Beverly Hills, California with her two sons, Brandon and Dylan.

Tracey Edmonds was interviewed by The HistoryMakers on November 19, 2013.