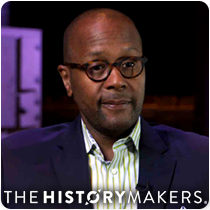 See how Tony F. Sias is related to other HistoryMakers

Arts administrator Tony F. Sias was born on December 20, 1964 in Jackson, Mississippi to Helen Louise Walker Sias and Leo Sterling Sias, Sr. After graduating from John W. Provine High School, Sias went on to receive his B.S. degree in dramatic arts from Jackson State University in 1988, and his M.F.A. degree in acting from Ohio University in 1992.

While earning his M.F.A. degree, Sias was an intern and resident at the Cleveland Play House in Cleveland, Ohio. After graduating, he remained in Cleveland and began acting in several of the city’s theaters including a production of Kathleen McGhee-Anderson’s Oak and Ivy at the Karamu House in 1993. Sias then went on to work as a program director for the Rap Arts Youth Fellowship Program through The Centers for Families and Children before moving to the Murtis Taylor Human Services System where he ran the Coordinated Arts Program for the Greater Cleveland Neighborhood Centers Association. In 1998, Sias performed in a production of Tony Kushner’s Angels in America: A Gay Fantasia on National Themes at the Dobama Theatre in Cleveland. For this performance, Sias and his fellow cast members earned a collective Ensemble Keefer Award. The next year, he returned to the Karamu House to perform in Crumbs From the Table of Joy by Lynn Nottage. Sias made one of his first directing debuts in 1999 at the Cleveland Public Theatre where he directed the world premiere of Keith Josef Adkins’ On the Hills of Black America. Then, in 2000, Sias became the director of arts education for the Cleveland Metropolitan School District. While in this position, Sias continued to perform in and direct productions throughout the city including Elevator at the Karamu House in 2001 and the Ensemble Theatre’s one-man show Paul Robeson. In 2003, while still working for the school district, Sias became the director of the All-City Musical and served as the artistic director of the Cleveland School of the Arts. He also began teaching at Cuyahoga Community College. In 2008, Sias served as a delegate from the U.S. Department of State to Istanbul, Turkey as a representative of the Council of International Programs, USA. In 2015, Sias became the president and CEO of the historic Karamu House in Cleveland. There, he continued to direct and create new productions including the Karamu House’s Holiday Jazz Revue.

Sias served on the board of trustees of the Community Partnership for Arts and Culture, Inc. and as a board member of The League of Historic American Theatres, Inc. He was also an advisory board member for Project 1 Voice, Inc. Sias also received several awards for his acting and directing in Cleveland including the Ohio House of Representatives Tribute for Excellent Leadership and the Times Newspaper’s Outstanding Director.

Tony F. Sias was interviewed by The HistoryMakers on September 25, 2018.

See how Tony F. Sias is related to other HistoryMakers