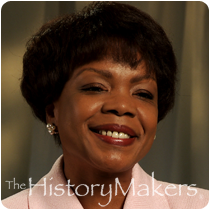 Pianist and music professor Toni-Marie Montgomery (1956- ) was born to Hattie Drayton in Philadelphia, Pennsylvania. She started piano lessons at the age of six, and began performing on the piano at age nine. In 1971, Montgomery’s mother used her hard-earned savings to buy her a Steinway grand piano. Montgomery attended the Philadelphia College of the Performing Arts, graduating with her B.Mus. degree in 1980. Only a year later, in 1981, she received her M.Mus. degree from the University of Michigan. Montgomery went on to earn her D.M.A. degree in piano chamber music within three years, becoming only the second person to receive that degree from the University of Michigan.

Montgomery became artistic director and assistant director of the School of Music at Western Michigan University. She then moved to Connecticut to serve as assistant dean for academic programs at the University of Connecticut’s School of Fine Arts. While teaching there, Montgomery participated in the founding of the Black Music Repertory Ensemble at Columbia College in Chicago. The Ensemble was founded in 1987 as an outgrowth of the Columbia College Center for Black Music Research. Montgomery left Connecticut in 1990 to become a professor at Arizona State University. During her ten year tenure, she served as associate dean in the College of Fine Arts and Director of the School of Music. In 2000, the University of Kansas School of the Fine Arts hired Montgomery as its first African American academic dean. When she left in 2003, the university inducted her into its Women’s Hall of Fame. Montgomery was then hired at Northwestern University, becoming the first African American and first female dean of the Bienen School of Music.

Montgomery is an active musical performer. She has travelled around the world to perform in countries such as Austria, Brazil, Poland, Lithuania, and Latvia. In 1994, Montgomery and the Black Music Repertory Ensemble recorded an NPR series entitled “African American Music Tree.” She has also appeared with the group on the “Today Show” and CNN. In 2003, Montgomery collaborated with cellist Anthony Elliott to release a CD entitled Music for Cello and Piano by African American Composers.

Toni-Marie Montgomery was interviewed by The HistoryMakers on August 26, 2010.

See how Toni-Marie Montgomery is related to other HistoryMakers
Donate Now
Click Here To Explore The Archive Today!